He Sent Me A Text Saying I Was Partying While He Languishes In Prison..That He Would Deal With Me’’ Movie Person, Seun Egbegbe’s Elder Brother Yusuf Cries Out As Police Arrest Him In Clamp Down On Producer’s Gang 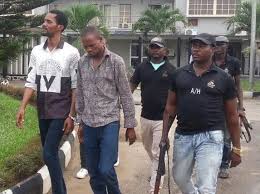 The brother of Seun Egbegbe and two others have been arrested by the police in Lagos State for aiding the Nollywood Producer as he robbed big phone shops.

Those arrested were two men simply identified as Kazeem and Muyideen and Lekan Yusuf, said to be Egbegbe’s brother.

According to the Lagos State Commissioner of Police, Fatai Owoseni, who paraded the suspects, Yusuf, Kazeem and Muyideen usually stay in the car while Egbegbe goes into the phone shops to get the goods.

Owoseni said as soon as Egbegbe emerges, they drive away in the get away car.

He said they were also part of the plan to rob Bureau De Change operators, which eventually backfired and led to the latest of the uncovered stealing exploits of Egbegbe.

Owoseni said the trio were arrested based on a petition by one Kemi Johnson, who claimed she was robbed by the gang in November 2016.

Owoseni, who paraded the suspects, said they were in the habit of going to big mobile phones shop to steal. He said: “The gang always targets big mobile phone dealers. “While Seun, the ring leader, will approach the shop, the rest will be in the vehicle so that when Seun is in possession of the phone, they drive off.”

But the suspects denied ever backing Egbegbe in his operations.

They said Seun implicated them because he was angry they did not visit him in detention.

Yusuf, Seun’s elder brother, they do not even talk, adding that he received a text message from him that he will deal with him for abandoning him at the police station.

He said: “On the day Seun was arrested at Ikeja, it was my boss that told me that he saw the story on Facebook and went to Area F the see him.

“But after then, he was charged to court and I didn’t go to see him, only for me to receive an SMS from him saying that he heard I was partying while he was languishing in prison and that he will use his power to deal with me.

“I forwarded the message to our mother.

“Two days later, police came to my house and took me to the station, showing me a petition written by one Kemi Johnson on November 22, 2016 that Seun and his gang came to her shop to steal phone and accessories worth N10 million, and that only Seun was arrested and later released without her consent and other members of the gang were never arrested.

“I never knew anything about the theft and the purported petition is just concocted to implicate me in a crime I know nothing about by my brother.

“He sent the same threatening message to his PA and promised that we will come and meet him where he is.

“If I am part of his gang, will I go to the police station the day he was arrested to see him?”

Muyideen said he was arrested at the gate of Ikoyi Prisons after going to visit Seun.

He said: “I went to Ikoyi Prisons to visit Seun and on my way out, I saw his girlfriend and I even wanted to join their car, but she told me no more space.

“Then suddenly I just saw police vehicle that stopped in front of me and I was asked to get in.

“I was shown a petition that I was part of a gang that robbed her shop late last year.

“Seun is my friend and I know him as a movie producer and music promoter.

“Even the day he was arrested at Gbagada for trying to dupe a Bureau de Change operator, I was in the car that took him to Gbagada because he told me he wanted me to accompany him to South African embassy.

“He came down along the way and we waited for him.

“Few minutes later, we saw him in company of a police patrol vehicle and a mallam.

“They were taken to Ogudu Police Station.

“The four of us remaining in the car (Lekan, Muyideen and AY) followed them to the station and that’s where the police told us their offence.

“I was not involved in any way with it.

“Seun just wants to implicate me in an offence I know nothing about.