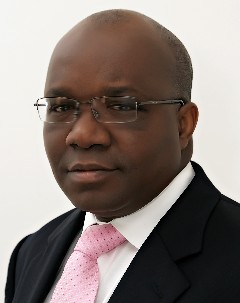 Again, death has intruded the enamored world of the rich; with consummate malice, it invaded the household of the former MD of Shell and current chairman of Julius Berger, Mutiu Sunmonu, snatching the life of his wife.


TheCapital findings revealed that she died in a private hospital after a protracted battle with cancer yesterday.
Nothing lasts forever; as the seasons turn, so does human life wither to age and disease, everything vanishes like morning dew. This grim reality currently benumbs the heart of Mutiu.
Mutiu and the entire Sunmonu family have been thrown into deep mourning since then. But tragic as her demise is, her family, friends and other loved ones may seek consolation in the fact that even in death, the infinitely generous and compassionate woman has gone on to join the heavenly choir invisible of the immortal dead; the souls who pass on but continue to live in minds and lives made better by their presence.
Described as a peace-loving, easy-going woman who did not allow her husband’s immense wealth becloud her sense of humanity and compassion for the less privileged. Since the news of her death hit town, friends and associates have been thronging the Sunmonu’s house to commiserate with them and offer words of consolation.
thecapital
Posted by MAN ABOUT TOWN at 1:35 AM