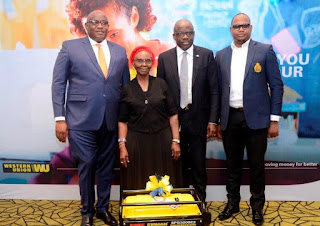 Ninety lucky customers of Skye Bank Plc., across different business locations of the Bank, have emerged as winners and received their prizes in the recently-concluded Skye Bank and Western Union® “Better Life” Promotion.

The three-month campaign, which ran from
December 5, 2016 to February 28, 2017, was geared towards encouraging increased patronage of the Western Union® money transfer service; and was specifically targeted to loyal customers who received or sent their transfers in any branch or business location of Skye Bank.

At the formal presentation ceremony which took place in Lagos, the Group Head of Retail Group of Skye Bank, Mr. Ndubuisi Osakwe proudly presented prizes to the 90 winners.

According to Mr. Osakwe, “the campaign encouraged increased patronage of the services of the Western Union money transfer service and was specifically targeted at those who collected their money directly from any of the over 300 Skye Bank Branches across Nigeria.

“The winners emerged by receiving at least a Western Union transfer through any Skye Bank account from our over 300 Skye Bank branches nationwide within the promotion period”, he said. According to him, “Each time a customer received money via Western Union at any Skye Bank branch, they automatically qualified for a draw entry and chance to be one of the lucky winners of business gifts.

Mr. Osakwe further noted that the campaign, which ran from December 5, 2016 till February 28, 2017 across all Skye Bank branches in Nigeria culminated in the giving away of prizes in four categories namely; Maxi Generators to 10 winners; Sewing machines to 20 winners; Laptops & Printers to 20 winners and Smart Phones with Data Bundle to 40 winners.

One of the lucky star winners who went away with a Maxi Generator, Mrs. Florence Ademiju Ojo, a Skye Bank customer of Osolo Way Branch was full of excitement and expressed her gratitude to the management of Skye Bank and Western Union for organizing the promotion to reward loyal customers, pledging to spread the news amongst her friends.

According to Mrs Ojo, “I received money through Western Union from different parts of the world; from the United States of America, the United Kingdom and all over, from both my biological children and other children that I raised up.”

“The promotion is very nice. I thank Western Union and Skye Bank for this rewarding program and pray that God will continue to lift up the two organisations.”

The Western Union Company is a leader in global payment services, providing consumers and businesses with fast, reliable and convenient ways to send and receive money around the world, to send payments and to purchase money orders. Western Union services are offered in more than 500,000 agent locations in 200 countries and territories and over 100,000 ATMs and kiosks (as of 31 December 2016), and included the capability to send money to billions of accounts.