N2m Per Night Hotel, Cedar In Ruins & Under Lock 7yrs After Assassination Of Owner Kunle Adeagbo 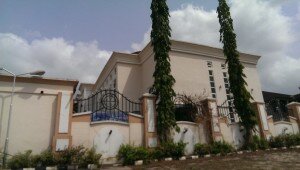 In Pablo Nurada’s poetic line, Nothing But Death ‘…death arrives among all that sound, like a shoe with no foot in it, like a suit with no man in it, comes and knocks, using a ring with no stone in it, with no finger in it…’ thus explains the dilemma of the dead as it comes to late socialite, Kunle Adeagbo whose business has come to ruins just 7 years into his demise.
The late Adeagbo’s Royal Cedar hotel at the high brow Alalubosa GRA in Ibadan was the
best hospitality haven in the ancient city when it was opened.

It was the only hotel then in the city that placed a 2million naira per night charge on its well furnished Presidential suite which once housed VIP guests like Redeemed Church General Overseer, Pastor Enoch Adeboye, the First Lady, Dame Patience Jonathan amongst many other prominent guests of the hotel.
That explained the style, connection and wealth of the owner who was killed in Lagos by unknown gunmen.
The hospitality haven is claimed to have been badly affected by the death of its owner who went under bad management and closed down business few years after his demise.
Papermacheonline’s photographer, Tunde Ayanda visited the once bubbling Royal Cedar and saw an edifice standing on its old glory.
Part of the building which still has the air conditioners in place was falling off as the main gates leading to the building were all under locks and key.
Insiders hinted that a massive fraud rocked the hotel which led to the closure and the ousting of its management.

papermache
Posted by MAN ABOUT TOWN at 6:15 PM