Details As Outpour Of Emotions Over Death Of Chika Ernest, Pilot That Flew Helicopter Which Crashed In Lagos Continue 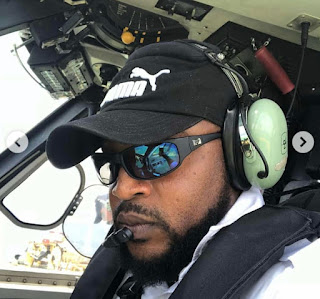 Friends, colleagues and family members are mourning the death of Captain Chika Ernest who was killed on Friday when the helicopter he was flying crashed into a residential building in Opebi, Ikeja area of Lagos.

Chika Prudence Ernest, his
partner Engineer Clement Ndiok and a yet-to-be-identified passenger were killed when the privately-operated helicopter belonging to Quorum Aviation Ltd crashed into a residential building at 16A Salvation Opebi Road, a business district in Lagos.

According to the aviation company, two crew members and a passenger were aboard the ill fated aircraft but nobody in the building, nor in the vicinity was injured.

The aircraft, a Bell 206, with registration number 5N BQW, came in from Port Harcourt, Rivers state with two crew members and a passenger.

Chika was confirmed dead on Friday, hours after the crash which occurred at 12pm, but his friend said he could have survived if he was treated with emergency when he was rushed to the hospital.

“I was told he was taken to the hospital but after taking all the videos for social media, they waited for the police report until he died,” wrote Gloria Ugolee who said Chika was his childhood friend from primary school.

“He was always looking out for others,” Gloria wrote in her tribute on Instagram. “He emptied the fuel tank to avoid explosion on impact, he crashed on a fence avoiding the roofs and house.”

Chika from Imo State, had been working for Quorum Aviation for a few years. And he went back and forth from Lagos and New York where he stayed on vacation.

Some of his friends and family who are still in disbelief have also taken to social media to mourn his death.

“Chika, I am still in disbelief that death just snatched you like that this morning! A young and promising life gone like that!! We are inconsolable but God knows best! Rest In Peace,” wrote a stunned relative, Ngozi Offor, on his Facebook post.

Offor described her cousin as “little but promising young cousin. We will continue to love you regardless.”

“I just heard this.. I’m so shocked and saddened by this.. wow,” music artiste, M.I Abaga who is said to be a friend of the late pilot has also taken to Twitter to mourn the young Captain.

Chika’s cousin with the handle @6lackculture said he spoke with the late pilot three days ago before he flew from Port Harcourt to Lagos and is “totally hoping this will be some fiction with a twist at the end.”

“He believed in me, truly. I can’t cry enough. I’m totally devastated. I totally wish my pen was magic. I would rewrite your story, Chika. RIP,” he wrote on Twitter.

The last post on his Instagram page shared on June 2, 2020, has been flooded with comments from well-wishers and mourners.

“Chika why? Thinking I called you just this morning and you promised to call me when you get into Lagos, but you didn’t come out from that plane. Why? Chika why?” a heartbroken Olivia wrote on Chika’s last Instagram post.

Jameel Omotara, Chika’s secondary school classmate wrote: “Chika may your soul rest in perfect peace with the Almighty. Amen. We really miss you but I know the Almighty has a better place for you in heaven. Rest on brother.”

neusroom.com
Posted by MAN ABOUT TOWN at 8:12 AM