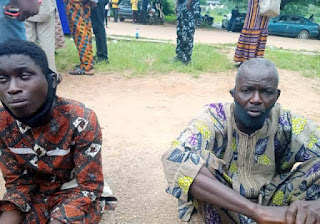 The Inspector-General of Police, Mohammed Adamu, has confirmed the re-arrest of a suspected serial killer, Sunday Shodipe, who escaped from custody days ago.
“Operatives of the Nigeria Police Force, Oyo State Police Command, have re-arrested the notorious murder suspect, Sunday Shodipe who escaped from lawful custody on 11th August, 2020,” police spokesman Frank Mba said in a statement on Sunday.

“He was re-arrested today, Sunday, 23rd August, 2020 by Police operatives at the Bodija area of Ibadan, the Oyo State Capital,” he added.
Posted by MAN ABOUT TOWN at 10:53 AM