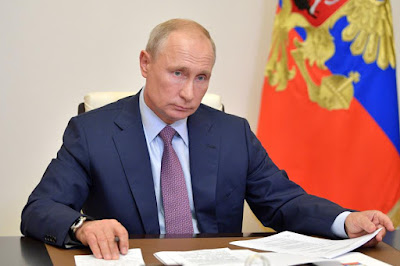 President Vladimir Putin said Tuesday that Russia had become the first country to approve a vaccine offering “sustainable immunity” against the coronavirus and that one of his daughters has been inoculated.⁣
⁣
The announcement came after scientists in the West raised concerns about the speed of development of Russian vaccines, suggesting that researchers might be cutting corners after coming under pressure from authorities to deliver.⁣
⁣
“This morning, for the first time in the world, a vaccine against the new coronavirus was registered” in Russia, he said during a televised video conference call with government ministers.⁣
⁣
“I know that it is quite effective, that it gives sustainable immunity,” he said.⁣
⁣
He said one of his daughters had been inoculated with the vaccine, developed by the Gamaleya research institute in coordination with the Russian defence ministry.⁣
⁣
“In this sense, she took part in the experiment,” Putin said, adding that she had a slight temperature after a second injection and “that’s all”.⁣
⁣
“What counts most is for us to be able to ensure the unconditional safety of the use of this vaccine and its efficiency in the future. I hope that this will be accomplished,” Putin said.⁣
⁣
Health Minister Mikhail Murashko said that clinical trials involving several thousand participants would continue