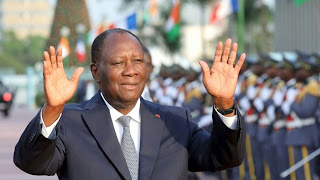 Violent demonstrations continued in Ivory Coast on Friday after deadly protests earlier in the week against the president's decision to seek a third term, and organizers elsewhere vowed further action against his bid to stand again.


In Bonoua, just outside the commercial capital Abidjan, all that was left of the town's police station on Friday morning was a pile of rubble and charred police vehicles following Thursday's clashes.
At least five people have been killed during demonstrations in recent days, with tensions running high since President Alassane Ouattara announced last week he would run for re-election on Oct. 31.
A column of police reinforcements drove to Bonoua on Thursday night to restore order after protesters ransacked the police station and carried the body of a young man shot with a live bullet to the royal palace. The protesters clashed with police who used tear gas, witnesses said.
Protesters set fire to a bus in Abidjan on Friday as tension remained high with protesters vowing to keep demonstrating until the October presidential elections if Ouattara did not take himself off the ruling RHPD party's list.
Posted by MAN ABOUT TOWN at 10:53 AM