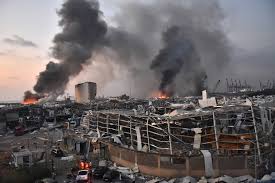 At least 25 people were killed and around 2,500 others injured when a powerful explosion rocked Beirut's port. Buildings were destroyed and windows shattered, with dozens of Red Cross teams racing to the scene.

It was not immediately clear what caused the explosion.

Windows were shattered and buildings were destroyed in the widespread damage, while smoke was seen billowing across the city. Damage appears to have spread for several kilometers.
Posted by MAN ABOUT TOWN at 12:37 PM