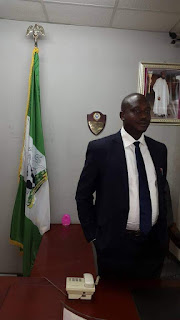 Embattled Edo State governor, Godwin Obaseki is not having it good with his re-election bid at the moment.

The drama started when the Governor decamped to the opposition party to sick his second term ticket.

Hon. Victor Edoror as a new Speaker of the Edo State House of Assembly by 17 was elected by lawmakers.

Report has it that the announcement came Thursday afternoon following the invasion of the Edo Assembly by security agencies drafted from Abuja.

The security agencies, it was learnt, were drafted to provide cover for the planned inauguration of the 14 lawmakers who were not inaugurated June last year. 3 pro-Obaseki lawmakers had earlier joined them making it 17.

Although reports has it that the move was foiled when the Governor and his deputy, Philip Shaibu stormed the Assembly, one of the lawmakers however claimed that the swearing in had already taken place before arrival of the Governor.

The lawmaker, who pleaded anonymity due to sensitivity of the matter, said the Oath of Office was administered on them by Deputy Clerk of the Assembly. He claimed the processes took place within the premises.

“I can confirm to you that Tiger (Edoror) has been elected speaker”, he said, declining further comment. Hon. Victor Edoror, alias Tiger, is lawmaker representing Esan Central in the Edo Assembly.

He has held the position of speaker in previous assemblies of the Edo parliament but was impeached at a time. It was not clear if the controversial speaker, Frank Okiye, was impeached in the process.

Okiye and six other pro-Obaseki lawmakers has been sitting inside the Edo State Government House for over a month, claiming the Assembly Complex at Ring Road was being fumigated over COVID-19 scare.

The relocation to the Edo Government House, Igbere TV learnt, was to monitor the pro-Obaseki lawmakers and ensure they remain true to the Governor’s causes until the September 19 Governorship election.

Following the invasion of the Assembly on Thursday, Governor Obaseki reportedly ordered that the roofs of the House be removed, while both the entrance and exit gates were blocked with heaps of sand.

Reacting to the development, a top government official said the election of Edoror as speaker will not hold water. The official claimed that Okiye had already declared the lawmakers seats vacant, and that the case was in court.

“Those that their seats has been declared vacant by the speaker are no longer members of the House, we only have 10 legitimate members now, pending when election will be conducted for the vacant seats”, he said.

“Don't forget that the PDP members are in court., their prayers is for the court to swear them in as second runner up. This case is a novel(new) case and the court may grant the prayers of PDP,” the government official added.
Posted by MAN ABOUT TOWN at 8:08 AM