Trump says he does not mind if Microsoft buys TikTok 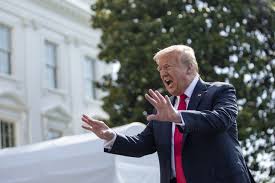 President Donald Trump said on Monday (August 3) he does not mind if Microsoft Corp buys the Chinese-owned short-video app TikTok, but any purchase by an American company would have to be done by a Sept. 15 deadline.
The Republican president, who last week threatened to ban TikTok over national security concerns, said he had a great conversation with Microsoft's chief executive and that it might be easier if Microsoft buys all of TikTok rather than 30%.

Trump said on Friday he was planning to ban TikTok amid concerns that its Chinese ownership represents a national security risk because of the personal data it handles.
The proposed acquisition of TikTok, which boasts 100 millions U.S. users, would offer Microsoft a rare opportunity to become a major competitor to social media giants such as Facebook Inc and Snap Inc . Microsoft also owns professional social media network LinkedIn.
Trump had dismissed the idea of a sale to Microsoft on Friday. But following a discussion between Trump and Microsoft CEO Satya Nadella, the Redmond, Washington-based company said in a statement on Sunday that it would continue negotiations to acquire TikTok from ByteDance, and that it aimed to reach a deal by Sept. 15.
Reuters
Posted by MAN ABOUT TOWN at 11:35 AM