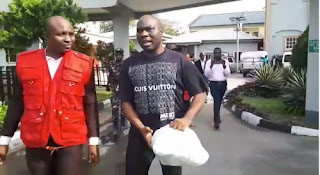 Internet celebrity, Ismaila Mustapha, popularly known as Mompha, was on Wednesday released by the Economic and Financial Crimes Commission (EFCC).

He was released on bail two weeks after he was re-arrested by the anti-graft agency in Lagos.

His lawyer, Gboyega Oyewole, said Mompha had withdrawn the N5 million fundamental rights suit he filed against the EFCC to challenge his re-arrest.

Mompha is standing trial alongside his company, Ismalob Global Investment Ltd, on an amended 22-count charge bordering on cyber fraud and money laundering to the tune of N33 billion.
Posted by MAN ABOUT TOWN at 6:48 AM