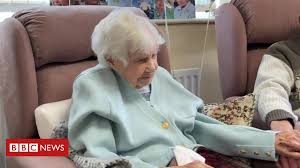 The oldest person in Britain has died at the age of 112.

Joan Hocquard shared her birthday, 29 March 1908, with the world's oldest man Bob Weighton, who died in Hampshire in May.

Mrs Hocquard spent her early life in Kenya where her father was a British colonial officer.

She went to boarding school in Sussex and later worked as a cook at a hotel in Geneva.

She married Gilbert Hocquard, who shared her love of sailing and travelling. When he died in 1981, she moved to Lilliput, near Poole.

Mrs Hocquard was filmed with Mr Weighton in March as they celebrated their 112th birthdays.