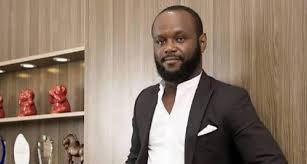 turned the toll gate to their protest ground for the past 12days were shot at by those Governor Babajide Sanwo-olu confirmed to be “military” under the cover of darkness.

We write in a state of shock at the wanton use of deadly and excessive force against peaceful protesters at the site of one of our company’s advertising boards in Lekki, Lagos. Loatsad once again stands with those who have for many days, exercised THEIR CONSTITUTIONALLY GUARANTEED RIGHTS TO PROTEST PEACEFULLY anywhere in Nigeria.

We made a business decision that has led to unintended consequences. As an outdoor advertising company that owns many advertising boards across Nigeria, we had earlier given instructions to our technical staff who operate the LED boards at all locations across Lagos and some states to shut them down so they could go home to their loved ones just as we did during the COVID-19 lockdowns.

This was in view of the curfew that had been declared by various governments earlier in the day. It is a decision we now regret as it left peaceful Nigerians – especially at the Lekki venue of the protests (literally in the dark) vulnerable to an armed attack because the boards had previously provided adequate illumination to that area. Our billboard run on generators and must be manned at all times.

With the curfew, we believed it was a threat not only to our staff but also the risk of exploding equipment amongst other things. We are not an essential services provider and took these measures with public safety in mind as a responsible company. Our heart goes out to everyone affected. WE ARE SORRY.

We once again strongly condemn any acts of violence and pray for those who are injured and have lost their loved ones as a result of nefarious agents taking advantage of unarmed young Nigerians to hurt them.

We further call on the authorities to take decisive action in bringing those responsible for these dastardly acts to justice and enjoin everyone to seek a peaceful resolution to this crisis.

May God grant our Nation Healing. 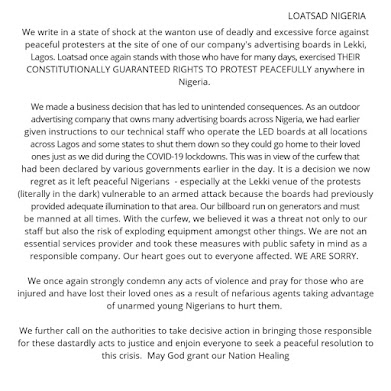 Loatsad
Posted by MAN ABOUT TOWN at 1:54 PM