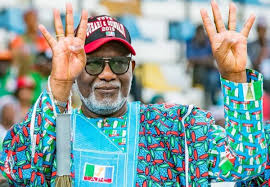 Governor Rotimi Akeredolu, the candidate of the APC, has scored the highest number of votes in Saturday’s Ondo State governorship election and has been declared the winner.

The result of the election, held in all Ondos’s 17 local governments, was declared by the Independent National Electoral Commission (INEC) on Sunday in the state capital.

Akeredolu Akeredolu polled 292, 830 to defeat his main rival Eyitayo Jegede of the PDP who scored 195,780 votes.