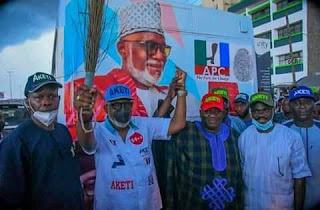 The candidate of the opposition Social Democratic Party (SDP), Mr. Peter Fasua on Monday stepped down from the race for October 10th governorship poll for the incumbent Governor, Oluwarotimi Akeredolu, SAN, saying “I share the same vision with Akeredolu.”

This is just as the SDP member representing Idanre/Ifedore Federal Constituency in the House of Representatives, Hon. Tajudeen Adefisoye, also endorsed Akeredolu for reelection, saying “Mr. Governor has assured me that he would develop Idanre.”

Akeredolu is the flagbearer of the All Progressives Congress (APC).
Adefisoye, popularly known as Small Alhaji, who addressed his supporters in Idanre on Monday, said “after consulting very widely with the leaders of SDP and other important leaders within and outside of Ondo state, especially the Speaker of the House of Representatives, Rt. Hon. Femi Gbajabiamila, I have decided to support the APC. But I want to assure that this decision was primarily taken for the sake of continuous development in Idanre/Ifedore Federal Constituency.

“We must realize that politics is all about interests and should not be played with emotions. Now that your leader has declared support for Akeredolu, we should agree with this decision and work for the victory of Akeredolu. This election is going to be operation win your units.
“But, I can assure you all that Akeredolu will win on Saturday. I also want use myself as collateral for Governor Akeredolu. I want to assure you that the governor will fulfill all his promises on developmental projects in Idanre and Ifedore. I should be blamed in the unlikely event that Governor Akeredolu did not fulfill his promises.” Adefisoye,”said.
Posted by MAN ABOUT TOWN at 2:09 AM