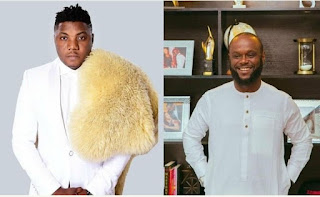 Friends in the know insist that the spat against Seyi Tinubu by Sodiq Abubakar Yusuf the popular singer popularly known as CDQ shouldn't have happened.

And they provided reasons for this assertion.

a spur of the moment guy thing, done and forgotten that was taken to the public space’’ is the theme of the narration to societynow.ng.

According to those in know, CDQ and Seyi, the son of influential politician Asiwaju Bola Ahmed Tinubu were very good friends – until the recent development.

They reportedly met at the house of another singer .who is a mutual friend on Wednesday, September 30, 2020.

‘’It was a gathering of friends on a social outing and in the course of discussions Seyi took CDQ’s designer cap to make a point, it was a discussion about the importance of education compared to the acquisition of material things. Seyi took the cap and put it on the floor to buttress the fact that anybody can unknowing trampled on it and it's ruined but the same cannot be done to education which reflects on general wellbeing’’ societynow.ng learned.

The sources disclosed that discussions moved from that to other areas of interest and before everyone dispersed.

‘’CDQ did not take any offense Seyi at the gathering which was natural because they were friends, they have done things together including supports for shows and concerts’’ societynow.ng learned.

The sources disclosed that it caught many of friends at the place of the happenstance by surprise when CDQ made a mountain out of the anthill of a matter on social media the next day.

Societynow.ng gathered mutual friends are particularly miffed that CDQ who is considered a member of their circle added to the pressure on Seyi Tinubu who is an open target based on the high profile of his father, Asiwaju Bola Tinubu - one of the chief promoters of the ruling political party All Progressives Congress.

Insiders disclosed that what their friends particularly find offensive is CDQ’s subtle threat of ‘’writing a piece’’.

Societynow.ng gathered that those who witnessed the development that sparked off the social media spat by CDQ are still trying to wrap their heads around his positive, whether just to trend or for a darker objective.

Insiders, however, disclosed that mutual friends have waded into the development and putting out the fire of the heat generated by the singer’s unexpected action.