The move is aimed at
controlling the spread of deadly virus, Ebola by carriers who might sneak into the country from flash points nation in search of cure.

The celebrated preacher made commitment halting the crowd puller programmes to government government delegations that visited him seeking efforts at collaborating in containing the spread of the life wrecker disease.

Details of this development are reproduced in this release signed by Mr Akeem Bello, Special Adviser on Media to Lagos state Governor, Babatunde Fashola

''In continuation of the efforts to prevent spread of the Ebola Virus disease into the country, a Federal and Lagos State Health Delegation Sunday visited the General Overseer of The Synagogue Church of All Nations, Prophet Temitope Joshua, to explore ways to ensure members of the congregation do not include residents or people from the affected countries.

Led by the Lagos State Commissioner for Health, Dr. Jide Idris, the delegation offered to work with the health team of the church in the areas of technical assistance, medical advice and training to ensure that no victim of the deadly disease comes to the Church from any of the affected countries undetected.

In his opening remarks during the interaction which took place at the premises of the Church, Dr Idris said the delegation decided to pay the visit to the Church because of the recognition that the Church is an International Christian Centre whose congregation comprise of people from all over the world including the countries of the West African sub-Region which have already been affected by the Ebola disease.

He said the visit is one the Government’s strategy of sensitizing faith-based organizations on the need to cooperate with the government to prevent the spread of the disease in the country by educating their adherents to escalate health issues to medical experts.Pointing out that the Federal and the Lagos State Government are working hard on how to prevent a spread of the virus into the country, Idris said the delegation felt that because the Church has some people from the West African sub-Region as members and because of the influx and population of the congregation there might be need to check and also raise the awareness level on the disease in the church.

“We have our strategies that we intend to share with you. Again we need to know the resources you have here because whether it is one or two cases, if they are allowed to get out, it is a major problem. We are here to work together on how to contain this disease”, the Commissioner told the Cleric.

Speaking further on the mission of the delegation, Director, Centre for Disease Control Professor Abdulsalami Nasidi, the visit was also both to inform the Synagogue Leader of the     deadliness of the Ebola Virus and to ensure that it does not escape into the country adding that it has become such a big problem in the sub-Region that it is already affecting the economies of the countries involved. The expert, who is also an Epidemiologist and Virologist, described the visit as “positive engagement mission” adding, “We are here to engage you positively. We know the powers of this House and your powers and we are duty-bound to protect you and your congregation”.

He noted that so far there is only one imported case of Ebola virus in the country and the Governments are “duty bound to make sure it doesn’t escape into Nigeria” adding “We do not doubt the power that God has given you, we can’t do that. But we want to help and make it work stronger”.

“So our mission is to come here and work with you to explore ways to make sure that this thing does not explode”, he said adding that the worries of Government   and why the Committee decided to visit the Church was because the congregation comprises people from all over the world.   He, however, particularly singled out the countries of the West African sub-Region –Liberia, Sierra-Leone and Guinea – as the greatest worry of the Government at the moment because they are the countries that have already been affected by the deadly disease.

On what the delegation intends to do, Prof. Nasidi explained that there are experts from the World Health Organization (WHO), the United Nations Children’s Education Fund (UNICEF) and other international experts to give guidelines, materials and technical expertise on how to ensure that the disease does not spread into the country.

“We have experts from the World Health Organization; Dr. Musa is an expert who has all the guidelines, all the expertise to support us, we have Dr. Yaunti of the UNICEF, he is head of the UNICEF Mission here in Lagos and she has all the materials to work with you to make sure we talk to your people to know how to handle Ebola”, he said.

According to him all the experts are here to work with the Committee on technical issues adding that together, the Committee would work with the Church’s health team,   “train them on how to handle this dangerous situation, pass some material to them, share knowledge with them and, if need be, we are ready to provide some technical materials”.He said the delegation also has health promotion materials which it would share with the Church’s health team as well as “some technical underground support to assist some of your laboratories, because we know you have some, to be able to empower us to be able to diagnose this thing”.

He also explained that burial rites are so deadly “because unlike every other disease, Ebola transmits even from dead bodies to the living”. He cited an example of a case in Guinea where ten out of those who participated in the burial of a family member died of the disease.

Thanking the General Overseer for granting them audience, the expert reiterated, “So these are areas we felt we should come and engage you and work with you to ensure that members of your congregation, everybody in Lagos, everybody in Nigeria will be free of this disease”.

Responding, Prophet Joshua promised to work with the Government to ensure that the disease does not spread into the country saying he would put some measures in place to ensure that people from the already affected countries do not enter Nigeria. One of such measures, he said, is to visit any of the countries when necessary rather than allow their residents come into Nigeria.

He also promised to suspend some of his major Church healing programmes for a few weeks adding, “I am ready to work with you. I love my country and I will be ready to work with you. Even if it is a rumour, there is need to secure our environment to ensure that it is safe”. Accompanying the Health Commissioner and the Federal Government officials on the visit were the Special Adviser on Information and Strategy, Mr. Lateef Raji, his Media counterpart, Mr. Hakeem Bello, Director, Centre for Disease Control, Professor Abdulsalami Nasidi and another official of the Centre, Dr. Frank Mahoney and others.' 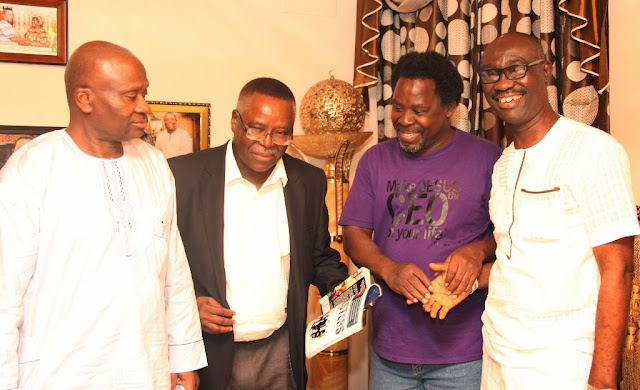