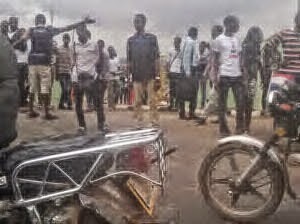 According to reports, students bearing placards with offensive messages have stormed the office of the Executive Governor of Ogun state, Ibikunle Amosun and forced a seal off.

Here are details of the trending development

'Students of tertiary institutions in Ogun State on Thursday in their hundreds embarked on a protest against hike in their tuition fees.
The angry students claimed the new fees introduced by the state government is outrageous, hence a need for instant reduction.
The office of Governor Ibikunle Amosun as Oke Mosan, as at the time of filing this report, was under lock and key, with policemen on guard.
Some of the fuming students of Olabisi Onabanjo University, Ago Iwoye, and Moshood Abiola Polytechnic, Abeokuta, told The Eagle Online that the hike in tuition fees was unaffordable by their parents.
One of them said: “We are not prepared to leave the Governor’s Office gate until our demands are met by the government.
“We pay as much as N140,000 for a session and the acceptance fee has also gone up to N40,000, which is unbearable for us.
“The government should hear our cry and reduce these fees they imposed on us.”
The students also demanding for the immediate release of some of them that have been arrested by the police.
Various placards with inscription such as: “Amosun is a thief”; “Reduce our fees now,” among others were displayed by the students' 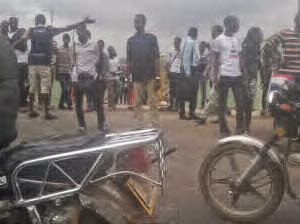