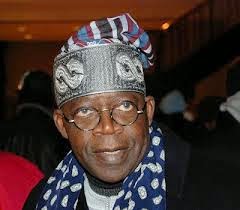 Along with his cronies.


The charges are thrown up by a group operating under the emblem, Committee On Equity and Justice.

The details are reproduced.

Number 4, Oyinkan Abayomi (formerly Queens) Drive, Ikoyi: A 5-bedroom detached house on one acre of land which was originally the Lagos State Governor's guest house since 1979 now belongs to Tinubu. The certificate of occupancy of the property valued at N450 million was signed and released to him by Fashola in 2007 shortly after he assumed office.
Tinubu's residence at 26 Bourdillon Road, Ikoyi was initially falsely presented as Oando Plc Guest House. Later, he purportedly bought it from Oando, and used public funds to rebuild and renovate it. The Lagos State Government bought the property and paid an undisclosed sum to him and thereafter gave the property back to him under the bogus Pension Bill he signed to law shortly before he left office in 2007. The property is worth over N600 million

2, THE LAGOS GUEST HOUSE AT ASOKORO & 250-HECTARE LAND IN LEKKI
The annex of the Lagos State Guest House in Asokoro, Abuja was bought by the State Government in 2006 for N450 million, purportedly to protect the main house from security breach. Shortly after Tinubu left office, the property was transferred to him under the pension plan he signed into law before leaving office.
The 250-hectare land valued at about N35billion and strategically located at the Ajah junction on Lekki Road was initially meant for a General Hospital for the people of Eti-Osa Local Government but was stolen by Tinubu and handed over to Trojan Estate Ltd – a company owned by Deji and Wale Tinubu – to develop as Royal Garden Housing Estate at the expense of the taxpayers of Lagos

3, THE 1,000 HECTARES AT LAKOWE
& 157 HECTARES ATLANTIC BEACH FRONT GOLF COURS
The 1,000 hectares of land valued at about N75billion located at Lakowe near Abijo at Ibeju-Lekki Local Government and given to Lekki Concession Company (LCC) which is partly- owned by Tinubu and Fashola and being developed as golf course and housing estate by Assets and Resource Management Ltd (ARM) as ADIVA project.
The prime land of 157 hectares with 2.5km of Atlantic beachfront valued at about N10billion and stolen by Tinubu from the communities of Siriwon, Igbekodo, Apakin, etc in Ibeju-Lekki Local Government and given to Ibukun Fakeye – his crony to build a golf course and luxury villa with little or no compensation to the villagers. In addition, Tinubu paid $20million (N3billion) out of public treasury to Ibukun Fakeye to commence the project in late 2006. Fashola has since released additional funding for this project, which is not owned by the state government.

4, 14-HECTARE PARKVIEW ESTATE, ALAUSA SHOPRITE & ORIENTAL HOTEL LAGOS
The 14-hectare Parkview Ikoyi Estate foreshore land reclaimed by Lagos State Government is now owned by Bola Tinubu.
While in office, Bola Tinubu allocated to himself the former Strabag yard beside the Lagos State Secretariat at Alausa, Ikeja. The property is now being occupied by Shoprite. This is public property brazenly stolen and now owned by Tinubu, aided by Fashola. He acquired the choice property at Lekki-Epe road on which he built and owns the multi-billion Naira Oriental Hotel and the extension of multi-storey car park beside it.
Also, the multi-level recreation centre by Mobil in Oniru Estate on Lekki-Epe road jointly owned with ARM and Tunji Olowolafe. All these assets valued at over N25billion were obtained without paying a kobo to the Lagos State Government.

5, TINUBU AND FASHOLA SOLD THE FOLLOWING PRIME LAGOS PROPERTIES TO THEIR PERSONAL FRIEND AND FRONT – PRINCE DIPO ELUDOYIN AT VERY RIDICULOUS PRICES:
The 3.8-hectare of land of Lagos State Fisheries office in VI (beside the Institute of Oceanography) valued at N3billion.
The fishery landing jetty at Badore (where the Ilubirin fishermen were to be relocated) valued at N500million
The entire Ogudu foreshore scheme initially earmarked for a low-cost housing scheme valued at N5billion
The Ilubinrin housing estate (which used to house Lagos state civil servants and judges up till 2007) valued at N2.5billion.
The former Julius Berger yard at Oko Orisan, Epe valued at N450million.

6, EKO AKETE PROJECT & FEDERAL SECRETARIAT
Alhaji Ahmed Tinubu raised a loan of N4.7billion on Eko Akete project for which nothing was achieved before he turned around to sell the property to his Chagouri friends of Chagouri & Chagouri and Hitech Construction Ltd at a ridiculously low price at the expense of the taxpayers of Lagos.
Tinubu applied to personally purchase the Federal Secretariat building while in office. When he couldn't get to buy it, he directed Fashola to stop the eventual owner of the complex to develop it. The complex is presently wasting away courtesy of the Lagos State Government.

7, TV CONTINENTAL PROPERTY & PRIME LAND ON ABOYADE COLE
Alhaji Ahmed Tinubu converted all the plots of land where Lagos Polytechnic was located at Ikosi near the old toll gate. He chased away the Polytechnic in 2006 and went ahead to locate the choice plots to himself, his cronies and political associates.
The headquarters of Television Continental (TVC), which is owned by him, is located there. He deprived the youths of Lagos of decent education because of his greed.
Tinubu solely sold the prime land on Aboyade Cole, Victoria Island which was recovered from some allotees, to UACN Properties Plc. The amount of proceeds till date, was shrouded in secrecy

8, LAGOS STATE TEACHING HOSPITAL (LASUTH)
& LAND BENEFICIARIES IN LAGOS
The Critical Care unit at the Lagos State University Teaching Hospital (LASUTH) in Ikeja, built and equipped with state funds, is now owned personally by Tinubu. He has put one of his trusted aides, (a supposed cousin of his) to run the outfit. It is run as a private unit and the proceeds are pocketed by the duo. The unit charges its users exorbitantly and most Lagosians can hardly afford to pay its high charges. Much of the revenue is derived from fees paid by the State Government for patients referred there by its General Hospitals.
Again, if the Lagos State Land's Bureau could publish the names and identities of beneficiaries of land allotees from 2000 to date, the scandal that will result is better imagined. Gbenga Ashafa, now a Senator, and Mrs. Awofisayo were the conduits through which these acts were being perpetrated. Both were also personally involved in various dubious land transactions on their own.

9,
TINUBU AND HIS PRIVATE JET
Asiwaju Bola Ahmed Tinubu has acquired for himself a new private jet. The jet is a Bombadier Global Express XRS, the same type owned by Forbe's richest man in Africa Aliko Dangote, Folorunsho Alakija and Mike Adenuga Jnr. Aviation experts say the luxurious asset would cost nothing less than $50million or more depending on specification.
Reports say the jet was ordered from the US and facilitated in Europe. The Jet, which is the second owned by the politician, was allegedly purchased so that Tinubu would not be refuelling when he goes on long haul journeys

10, ALLOCATION OF CHOICE PROPERTY TO TINUBU'S CRONIES
Prime land and properties have been used to pay off public officials who are personally close to Tinubu and Fashola for “jobs well done” or for being privy to sensitive information, notably:
(a) Dele Alake, former Commissioner for Information and Strategy, was sold a whole house on Alexander Road, Ikoyi where he lived as official quarters at a give-away price.
(b) Rauf Aregbesola, Osun State Governor, who was a former Commissioner in Lagos as well as Muiz Banire, also a former commissioner, got detached houses at Ladoke Akintola Street, GRA Ikeja for their “good job” while serving under Tinubu.
(c) Yemi Cardoso and Wale Edun, both former commissioners, were sold houses on Iru Close, and another location in old Ikoyi at give-away prices by Tinubu
Posted by MAN ABOUT TOWN at 2:28 AM