It is a very challengingly interesting time for Eco Bank Boss, Jibrin Maku. 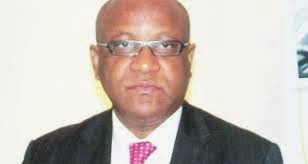 He is enveloped in a growing sex mess and battling to quell petitions of abuse of office and clandestine political transactions to the Central Bank of Nigeria and Economic and Financial Crimes Commission.

It seems Ecobank MD Jibrin Maku gentle mien has deceived many for years as naijahottestgist over the last few days have gotten access to more information about his dirty sex secrets,we can reveal to you that Sade his Mistress and bedmate of the last 48months was actually introduced to him by Another of his lover Tunrayo who wanted him to help out a Cousin who needed a job but promptly our very hardworking banker within few weeks of helping to get her a job began to shuttle between the 2 cousins before Tunrayo found out and it became a big family feud which has extended to other members of their family.
In a related developmemt the petition written by some groups to the CbN AND Efcc is already generating heat among Board members as efforts by him to kill the petition has failed and any moment from now the agencies might take action,we will continue to keep you posted as events unfolds,But in case you missed our earlier story on him we reproduce it below
This are horrible times for Ecobank Md jibrin Maku as his career and Homefront are on fire at the same time Naijahottestgist can reveal, First is the Allegations of him using his position as the Md of the bank to bankroll Apc because of his friendship to certain people in the party, Our sources told us that the sequence to which Maku has made funds Available has been susipious,you will recalled that Maku was the only Bank Md who took the risk to give former Gov Fayemi a 4b loan a month to his election and presently Gov fayose has refused to pay back the money he believes was used to fund fayemi reelection bid and at the same time closing his eyes to give Aregbesola another 1b overdraft which the Osun Governor used to mop some of the salaries Arrears close to the October Election and our source close to the PDP top notch indicates that there are incrimating evidences that Maku has been providing financial Aid to the presidential campaign of Gen Buhari and a petition has been sent to the presidency and the Apex bank Cbn and he repordely spend the weekend working on his contacts to help him out.
In a related Development,Maku’s Marriage is on the line as his American based wife is said to have realized late December that one of Maku’s personal Aides sade does not end her duties in the office but helps to keep the brilliant banker warm while she is ensuring that the children are focused in school,All hell has been let loosed and she has been threatening fire and all that the only thing that would spare the marriage is for the husband to sack the Aide or risk Divorce,our source added that Oga Jibrin has been worried this past few days as he didn’t know how his funding of Apc Activities became public knowledge as he was hoping to go into full time politics when he retires and he harbored so much hope on Buhari winning and he using his closeness with the Apc guys as springboard to get started.
Prior to his appointment was the Executive Director in charge of Treasury & Financial Institutions.Aku has over 26 years experience in banking with 17 at senior management levels. He holds both BSc. and Masters Degrees in Business Administration. His banking career included key positions in Capital markets, Foreign Exchange, Treasury Management, Operations and Technology. He had previously worked for 16 years with Citibank Nigeria and was Executive Director Afribank Nigeria Plc between June 2003 and December 2005.
Aku took over from Mr. Offong Ambah, who has since been elevated to Group Executive Director, Ecobank Transnational Incorporated in charge of Ecobank Capital. Ecobank Capital is responsible for overseeing all Ecobank Group treasury, investment banking and asset management businesses across the Ecobank Group’s 29 country network
Posted by MAN ABOUT TOWN at 1:15 AM