‘I am going to use my second term in office to create an avenue for wealth creation, so that young graduates can have an alternative to be self-reliant’ – Re election seeking President Goodluck Jonathan. 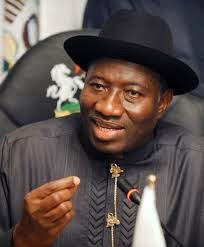 Re election seeking President of the Federal Republic of Nigeria, Goodluck Jonathan has made further revelations on what would be the major thrust of the administration once elected for second term
.

President Goodluck Jonathan has assured youths in the country that he will focus on youth development, if re-elected for a second term in office

Jonathan said this on Friday in Calabar, Cross River State while addressing supporters of the Peoples Democratic Party at a campaign rally ahead of the February 14 presidential election.

He assured the people of the state that his government would not disappoint them, if he was re-elected into office for another four years.

He said: “I am going to use my second term in office to create an avenue for wealth creation, so that young graduates can have an alternative to be self-reliant.

“If Nigerian youths are meaningfully engaged, it will reduce social vices and promote the economic profile of our great nation.”

Jonathan urged youths in the state to have a positive outlook towards life, adding that the future of the country was in their hands.

Also speaking, Vice President Namadi Sambo described President Jonathan as the most qualified for the job, adding that his achievement in office had transformed the country.

Highlighting some of the achievements of the President, Sambo said that the 550 KVA Calabar power plant had been delivered and ready for use.

According to him, the nation’s industrial sector has received a boost.
Sambo added that this was manifested in the current production of 35 million tonnes of cement annually from two million tonnes previously.

Dr. Adamu Muazu, the PDP National Chairman, said that Cross River State had been a PDP state since the democratic dispensation.

“Cross River is PDP and PDP is Cross River,” Muazu said.
He thanked the people of Cross River State for supporting the party and urged them to remain focused.
Posted by MAN ABOUT TOWN at 2:48 AM