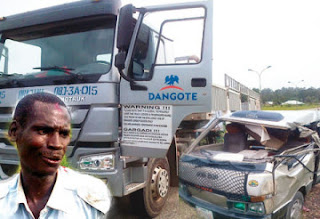 No fewer than 11 people lost their lives, while five others are in a critical condition after a fully-loaded commercial bus collided with a Dangote trailer at the Akintelu end of the Benin-Sagamu Expressway.
The commercial bus, owned by Efex Motors, with number plate, Badagry DG 36 ASJ, was said to be conveying mostly guests of a wedding that held in Benin, the Edo State capital.


They were said to be heading for Lagos on Sunday, when their vehicle collided with the overloaded Dangote Cement trailer, heading towards Ore.
The driver of the Dangote vehicle, identified as Idrisu Oseni, was reported to have immediately fled the scene, along with his motor boy.
PUNCH Metro learnt that among the deceased were three families, each with three members.
Officials of the Federal Road Safety Corps, Ondo State command, and policemen from the Igbotakun division,  were said to have removed the corpses from the road and deposited them in a morgue.
They also removed the wreckage to clear the traffic that the accident generated.
The Ondo State FRSC Sector Commander, Osas Osadebamwen, said the accident was caused by the Dangote trailer driver, who “dangerously overtook the Efex bus.”
He said, “The accident happened around 3.30pm on Sunday  and involved a Dangote trailer conveying bags of cement and a fully-loaded Efex Motors Toyota Hiace bus. We gathered that most of the occupants of the bus were returning from a wedding ceremony which held at the weekend.
“We discovered that the Dangote trailer driver travelled at top speed. He left his lane and went to another lane. Instead of waiting for the vehicle that was diverting, he was impatient.
“Because he was speeding, he couldn’t control the trailer. While struggling for control, the front part of the trailer detached and slid on the median. The trailer tyres burst into flames at that point. The backside of the trailer went to the other side of the road, where the Efex bus was coming from.
“In the end, 11 people died in the accident, including eight adults and three children. Their remains have been deposited in a morgue, while the injured were taken to the Ore General Hospital for treatment.”
A source, who did not want to be identified, said a celebrity was among the deceased.
“I learnt that a very popular man was among those that died. Three families, with two to three members each, also lost their lives,” he said.
An official of the FRSC, who asked not to be named, said immediately the accident happened, the Dangote trailer driver fled the scene.
He said, “This is the second time in two days that the Dangote truck drivers would cause an accident on this road. And usually, when the accidents happen, the drivers disappear into the bush.”
The Ondo State Police Public Relations Officer, Femi Joseph, confirmed the incident, adding that 11 people died on the spot, while five others were in a critical condition.
He said the truck driver drove against the traffic, which led to the accident.
He said, “The accident involved a Dangote Cement Company trailer laden with about 900 bags of cement, and a commercial bus belonging to Efex Motors.
“Preliminary investigations showed that the Dangote driver drove against the traffic. He rammed into the bus and pushed it off the road, thereby killing 11 people, including the bus driver, Ramoni Ajadi. We have commenced investigation into the incident.”
The Head of the Public Relations Unit of the Dangote company, Tony Chiejina, and his assistant, Sunday Esan, did not pick their calls and had yet to respond to text messages sent to them as of press time.
Efex Motors did not also pick calls placed on its official line by our corresponden