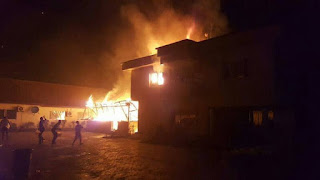 The house of the Akwa Ibom State Commissioner for Works, Ephraim Inyang was on Sunday gutted by fire.
Although no life was lost to the fire incident, The Nation learnt that property worth millions of Naira were destroyed in the building.
The house is located at L Line, close to De Silva Hotel in Uyo, the state capital.
The fire incident which occurred around 7pm on Christmas day destroyed a particular
section of the house.

It was gathered that the Fire Service men battled the inferno though they were contacted late as there was no occupant in the compound during sad incident.


Sources say they fire incident may have been caused by an electrical equipment which might have been switched on.
The rented building is owned by an Akwa Ibom – Port Harcourt based business man.