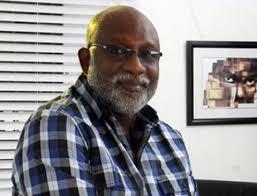 Few women bear the crucible of pain and face down death in a no-holds-barred joust and live to tell their story.
But Betty Akeredolu did and sheemerged with her life intact.
Very few people are aware that the in-coing First Lady of Ondo and wife of the state’s governor-elect, Rotimi Akeredolu, once took a trip down death boulevard while
she battled life-threatening cancer of the breast.

According to her, the fight against cancer was a struggle she would never forget.
But with unprecedented faith and towering resilience, she survived the deadly disease.
Now that she’s the in-coming First Lady of Ondo State, she is ready to support other victims of the deadly disease.
Let’s hope money, power and fame wouldn’t change her to a fashionista whose greatest passion would be the trivial and uninspiring.
Thisday
Posted by MAN ABOUT TOWN at 9:27 AM