President Muhammadu Buhari’s Chief of Staff, Abba Kyari, has made an emergency trip to London in search of medical treatment after suddenly falling ill on Wednesday at the Presidential Villa. 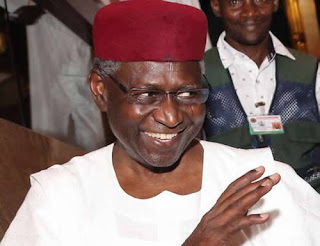 Sources at Aso Rock disclosed that this was the second time Mr. Kyari has ended up in a hospital within the last one month. None of our sources could state the precise nature of the presidential aide’s sickness.
However, one of our sources said that Mr. Kyari, who was present at the Kaduna home of President Buhari’s powerful nephew, Mamman Daura, during a stunning high profile raid that led to the kidnap of Ambassador Bagudu Hirse two weeks ago, was badly shaken up by the incident. “He is still in shock from the attack,” said the source.
SaharaReporters has done several reports detailing how Mr. Kyari has become amassed wealth by coddling corrupt Nigerians seeking to be shielded from investigation or prosecution. He and a few top confidantes of President Buhari have also worked behind the scenes to remove Ibrahim Magu as the chairman of the Economic and Financial Crimes Commission (EFCC).
A source at the Presidency said President Buhari told Mr. Kyari to take a break to go and look after his unsteady health. The source said Mr. Buhari was already considering replacing his ailing CoS with the current Minister of Education, Adamu Adamu. However, the source said several aides to Mr. Buhari were opposed to replacing Mr. Kyari with Mr. Adamu, explaining that the aides believe the minister would be even worse than Mr. Kyari.
The source at the Presidency also claimed that Mr. Kyari telephoned President Buhari earlier today from the U.K. to report that he was feeling better


saharareporters
Posted by MAN ABOUT TOWN at 1:20 AM