No fewer than three worshippers at the Synagogue Church of all Nations, Ikotun, Lagos State, have been confirmed dead after a stampede on the church’s premises on Saturday. 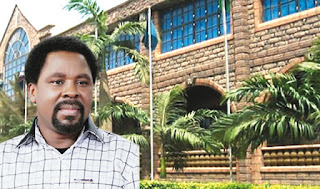 PUNCH Metro learnt that the victims were part of a crowd that struggled to see the church’s General Overseer, Prophet Temitope Joshua, during a special healing service.
Our correspondent gathered that while two of the victims were identified as Emeka Okonkwo and Emmanuel Oherin, the third victim had yet to be identified.
Their corpses were said to have been deposited in a morgue in the state.
An eyewitness, who did not want to be identified, said the stampede occurred around 4.30am.
He said, “It was the church’s annual deliverance and healing programme. Usually at this time, the church becomes a beehive of activities as people come in their thousands to see the prophet for miracles.
“People lodge in different hotels surrounding the church. And they all arrive at the church very early.
“There is a canopy on the premises where worshippers are screened before they see the man of God.
“However, on Saturday, after being screened, the crowd was much and they started struggling through the doorway to see the prophet. In the process, three people collapsed. They were rushed to the Isolo General Hospital, where they were confirmed dead.”
Another source said the two victims were identified through their phones, adding that the third victim did not have any means of identification.
“Their families were immediately contacted and they identified them. The police from the Ikotun division were also contacted,” he added.
A police source said the corpses were taken in an ambulance, adding that the Ikotun Divisional Crime Officer and the Area Commander, Area M, accompanied them to the mortuary.
As of 2pm when our correspondent left the area, a service was still on in Synagogue.
When contacted, an official of the church, who did not want to be identified, urged our correspondent to forward his enquiries to the church’s email address.
He said, “Mr. Folarin, while I appreciate the fact that you have to do your job as a journalist, I also must protect my personal integrity. I will advise you send a mail to info@scoan.org to confirm before publishing any story.
“Sometimes, rumours get to the press and injure the reputation (of) our subjects, thereby making journalism look like a witch-hunt.
“I will also advise you to be most objective. Please send a mail to the email address before publishing any story.”
Our correspondent sent an enquiry around 3.54pm which had yet to be replied to as of press time.
When our correspondent called a telephone number spotted on the church’s website, another official with a foreign accent, denied the incident.
She said, “Nothing happened on the church premises yesterday. Nobody died. Nobody. Thank you.”
The Police Public Relations Officer, SP Dolapo Badmos, however, confirmed the incident, adding that investigations were ongoing.
She said, “The story is true. Investigation is ongoing as we await the result of the autopsy. For now, we are treating the case as sudden and unnatural deaths.