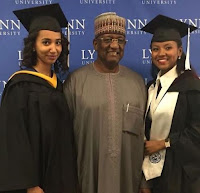 There is a storm in Yataka Indimi. It bellows like a hurricane stuck in a marigold or suburban azalea. You couldn’t have forgotten so soon how Yataka raised a storm during the traditional introduction ceremony of her brother and Mr. President’s daughter, Zahra.
Yataka insisted on taking her mobile phone into the Presidential Villa in Aso Rock, Abuja, contrary to security protocol. Yataka wanted to record all the proceedings, including the delivery of the boxes made by the French luxury brand, Louis Vuitton, with her mobile phone, despite the fact it was against standard security protocol in the villa.
However, a struggle ensued between Yataka and the security officials who tried to compel her to comply with protocol, only for her to resist. The incident attracted
the attention of other dignitaries who tried to stop the scuffle.

There is no gainsaying Yataka is the most troublesome of the popular daughters of business mogul, Mohammed Indimi. She is the wife of Mohammed, the first son of ex-Minister of Power and Steel, Alhaji Bashir Dalhatu, who died in a power bike accident.
Since Mohammed’s death, Yataka has refused to remarry. Mohammed died on October 1 on his way to Abuja after participating at a bikers’ convention in Uyo, the Akwa Ibom State capital. Mohammed, according a source, had told his driver to drive along while he rode on his power bike.