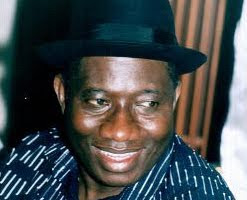 A family source of Acting President of Nigeria, Goodluck Jonathan has made clarifications on the relationship between number one citizen of the country, his wife Patience and his secret mistress Maris.
The source who spoke on the condition of anonymity confirmed that indeed Jonathan is romantically involved with Maris- but his wife is in the know of the development.
He further explained that contrary to the believe in certain quarters, the lady from the Nimbe tribe of Brass Local Government of Bayelsa state Nigeria bore the acting president just a child- and not two.
He also confirmed that plans are in top gear to make the union a formal affair.
According to the source ‘the wife of the acting president has accepted the lady and the child as one of her own biological children’
The source insisted that contrary to reports Patience has children of her own- and not adopted kids.
Based on these new findings it is presumed that the story of the acting president’s romance with Maris is a known development to Patience and a handful of the couple’s associates.
‘ The Acting president is a straight forward man that doesn’t keep secrets from his wife and those that matters to him’ the source rounded off.
This disclosure came on the heels of stories making the rounds that the Acting President has a secret mistress with children hidden away from his wife and close associates.
Posted by MAN ABOUT TOWN at 3:41 AM