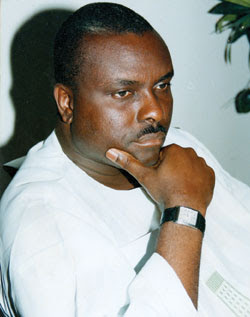 Former Governor of Delta State Chief James Ibori needs a minimum of three hundred million naira to sustain the operations of his newspaper company the Daily Independent.
The fund is meant to offset over four month basic salaries of staffers in bid to appease angry workers.
The employees of the powerful politician are threatening to paralyse commerce at the newspaper house - if all their debts are not paid.
Daily Independent set up by the influential Nigerian when he was the governor of Delta state parades over three hundred staff in it employment.
The salaries and allowances vary depending on status within the establishment.
The former governor reportedly hinted heads of the workers union of his monetary need at a meeting held at the Wempco road Agidingbi complex of the newspaper company on Monday January 18 2010.
He however threw in a clause: he doesn’t have the money to care of the bill at present.
The newspaper owner reportedly told his workers to keep on working that he would pay off the debt as soon as he source for the money.
A follow up meeting held with the representative of the union with Ibori to negotiate for a more mutually beneficiary payment system on Tuesday January 19 2010 resulted in the same result- keep working till I get money to pay you.
The staffers are said not to be happy with the situation of things.
They had gone on strike for a week in the last quarter of last year and successful got a portion of their back log of salaries paid.
The action which led to the sack of the Managing Director Ted Iwere had equally earned the workers promises from Mr Ibori that all outstanding salaries will be paid within a specified period.
The deadline has since come and gone.
At press time the workers are holding round the clock meeting on how to get their demands to be met- with talks of another strike action to paralyse operations at the place renting the air.
It is not clear how Mr Ibori intend to handle the looming strike action.
Posted by MAN ABOUT TOWN at 3:41 AM