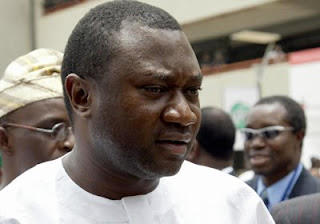 Billionaire business currently off the klieg light Femi Otedola is back in the country.
The respected man of commerce who made his name as a big player in the haulage world had travelled out of the country after his protracted fight with his friend of many years Alhaji Aliko Dangote.
Since then he has remained off the social radar.
Information at the disposal of Gist Ville revealed that the boss of Zenon Oil is back into the country.
And aside this he now worships at the Christian ministry led by celebrated man of God Pastor Paul Adefarasin- House on the Rock.
Sources at the place maintained that Mr Otedola is now regular worshiper at the Sunday service of Muson Centre Onika site of the Christian gathering.
Informants divulged that he was first spotted at the place on Sunday January 24 2010
The adorable husband of Nana reportedly attended the second service.
Insiders explained he came ‘in incognito’ and left the same manner.
This is said to be his style ever since at the Christian centre.
Posted by MAN ABOUT TOWN at 3:32 PM