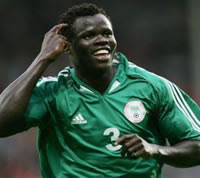 Footballer Taiye Taiwo should complete his private home in Nigeria and move his family into the edifice described as ‘magnificent’ by observers before the end of the world cup.
The beautiful building the popular round leather game player is putting together is located in Festac Town Lagos.
The Olympic Marseille of France and super eagles player is said to have been working on the house tagged a duplex befitting his status for about two years now.
According to a source ‘ He is not rushing anything. He is taking his time to get things right, achieve the desired taste and effect’
And this patience appeared to be paying off by the day. Those who have seen the architectural work tagged it ‘ a master piece in and out- even without the finishing in place’.
‘it is so easy to visualise how wonderful it will look like with the level of completion once the finishing materials are added’ another source quipped.
Those who should know divulged that it will not be too long before passive observers see the finished product from outside and insiders behold the main thing from the inside.
The celebrated footballer is said to have imported all required finishing materials for the house from France. The materials are said to have started arriving.
The furniture that will adorn the place is said to be part of the ordered products from France- it is yet to be confirmed whether they are part of the early arrivals or not.
‘I can’t really say this is what has arrived or not, all I know is that Taiye wants to return to his private home from the world cup trip and based on what is on ground he should be able to’ an insider insists.
Taye Taiwo, one of the favourites of the new Super Eagles coach Lars Largerback for the upcoming world cup in South Africa presently quarters is wife and child at a rented apartment in Gowon estate Lagos.
Posted by MAN ABOUT TOWN at 4:05 AM