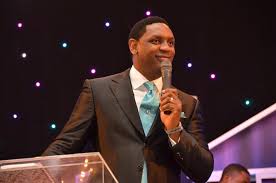 Senior of Pastor in Abuja based ministry widely addressed as Coza (Commonwealth of God Assembly) has initiated moves to clean up his sex mess.

A female member, Ese Walter had alleged she had a week long sexual relationship with the Pastor in the guise of teaching her ' a level of grace' she doesn't understand.

Ms Walter claimed the church leader manipulated and preyed on the docile state of her religious form to achieve his aim.

The accuser claimed she blew the whistle to help correct a wrong, since the church hierarchy had refused to act on the charges.


Ese's allegations had opened a flood gate of other cases. Another church member identified as Franca surfaced and alleged the preacher described as 'with uncommon prophetic insight into the word' allegedly lured her to Wheatbaker Hotel, Lagos for sexual relationship.

The 2nd accuser alleged the Coza front man described his wife, Modele as ' “postcard…pretty on the outside but flat and empty upstairs....sex with her was like having sex with a cold dead fish.” as part of ploy to have his way with her.  Pastor Fatoyinbo runs the Abuja based headquarter of Coza along with his wife under the facade of 'the perfect couple to imbibe'.

Franca claimed she escaped the preachers lecherous move with threats of screaming rape. She alleged further that there are mobile phone video recordings and pictures as evidence should the tender of the word attempts to deny.

Other accusations including alleged illicit relationships with other members including two sisters and a married woman had joined the growing list.

The accused has refrained from issuing a concrete denial to these allegations- with his most elaborate reply been ' preparing a robust response'.

Findings however have it that, the preacher is working contrary to his public posture behind the scene.

Along with his lieutenants, he is said to be employing a two fold strategy..blanket the allegations from the pubic domain and appease the accusers. All with a primary objective 'stifle outcry and put a stop to the whole mess'.

Digs revealed a rapport with information dispensers are being created and serviced to 'blanket' the allegations and the 'attendant outcry'.

Another crew are said to be seeking out the accusers- and all members in general- to protect the ministry by making the grouse(s) 'an internal affair'.

The accusations and public outcry are dwindling by the day.

Whether the move would be effective on the long or short term remains to be seen.
Posted by MAN ABOUT TOWN at 2:58 AM