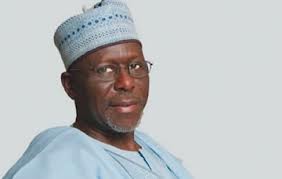 Governor of Kogi state, Idris Wada's popularity in his area of operations has increased.

And it is not for his management of state's resources or- but for matter relating to his prowess behind the door(s).

The state head man is alleged to have put two ladies in the family way at the same period. And both are not married to him'.


Insiders disclosed the identities of the ladies involved as- one of his aides, Halima Ibrahim and an upcoming actress, Linda Black.

The two expectant mothers are said to enjoy great patronage- and were regular guests at his favored rest house disclosed as 'House X'( described as a love nest of sort)..

Insiders revealed, news of this development is fast becoming the most popular gist in Kogi state.

And, the cause of present dissatisfaction in the first family's homestead.

Mr Wada's wives, Halima and Amina are said to take exemption to the occurrence.

Formerly at war over struggle for the most relevant 'wife of the governor'- the wives are said to have discovered a common front to battle the state helmsman.
Posted by MAN ABOUT TOWN at 2:37 AM