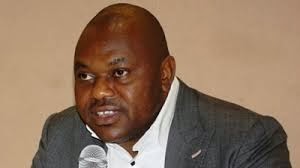 The gubernatorial ambition of the speaker of the Delta state house of assemble, Mr Victor Ochei has suffered a huge set back.

He stands accused of a N1.2b fraud by youth association in the state.


The group operating under the platform, Delta Youths have dragged the guber hopeful to anti graft agency, EFCC.

The youths wants the Speaker investigated and prosecuted.

Here is an unedited version of the report source by source by naijacelebrities.net

The programme was held at the Goldman School of Public Policy, University of California, San Francisco.  About 40 persons, including 29 members of the House; Emma Okoro, the former Speaker of the House now the Chief Adviser to Governor Emmanuel Uduaghan on Legislative Matters; as well as directors and aides to key officers of the House, were in the travel party.

In a petition, the Delta State Youth Forum for Good Governance (DSYFGG) asked the Economic Financial Crimes Commission (EFCC) to probe the matter, claiming their moral duty as citizens to press for accountability and responsibility of public office holders according to the mandate given by the people.

“The main purpose of the training was for earning wealth illegally thereby committing an economic crime as defined in section 40 of the Economic Financial Crimes Commission (Establishment) Act 2004 and other acts of financial ignorance and wanton acts of impunity being perpetrated by Victor Ochei led House of Assembly in our dear state,” the youths said.

They added: “By virtue of section 15 sub 5 of the 1999 constitution of the Federal Republic of Nigeria as (Amended) the state shall abolish all corrupt practices and abuse of power. Section 24 (d) of the said constitution provides that it shall be the duty of every citizen to make positive and useful contribution to the advancement, progress and well-being of the community where he resides.”

Urging the EFCC to swing into action before the relevant documents needed for the investigation are destroyed, the petitioners said:

The petition was signed by the President General of DSYFGG, Comrade Prince Kpokpogri, Omo-elo Akokaike Esq, legal Adviser, and Joseph Opone Terry, director, strategy and media.  It was copied to President Goodluck Jonathan, Senate President David Mark, Governor Emmanuel Uduaghan, the Inspector General of Police, the National Chairman of the Peoples Democratic Party, and several others.

'In another development, DSYFGG said it has issued a seven-day ultimatum to the Assembly, requesting the clerk, as a matter of urgency and importance, to provide it with full details of the sum of money that was approved for the ongoing renovation and construction of new buildings in the complex'

Ochei is the individual being positioned by incumbent Governor Uduaghan to take over the mantle of leadership in Delta State.

Sources confirmed campaign to achieve this aim quietly gaining ground until the latest twist and allegation of fraud.
.....additional report saharareporters.com
Posted by MAN ABOUT TOWN at 4:16 AM