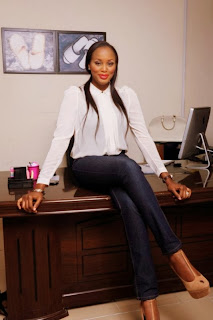 she just lost her younger sister.

The deceased is identified as Ifeoma.

Details of the passing away are still sketch at press time.

But insiders described the former most beautiful girl in Nigeria pageant queen as 'Heart broken'.

She is said to have initially written on her page on social media, Face Book '''God please bring her back. this is too hard to bear. Ifeoma please come back' and later officially announced '
''We lost my sister Ifeoma, still like a dream, so hard to bear''

Witnesses confirmed the act earned the bereaved torrents of consolatory messages.
Posted by MAN ABOUT TOWN at 5:49 AM