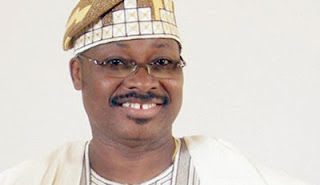 He has been remanded in prison custody till next adjournment.

Sources confirmed he is currently undergoing prosecution for alleged fraud perpetrated- along with others- while in office.


Here is the report on the unfolding scenerio.

Adedeji is standing trial alongside Yinka Fatoki and Kolawole Adewole on a six-count charge bordering on conspiracy and fraud.

They pleaded not guilty to the charge.

'At the hearing in the matter, trial judge, Justice Chukwujekwu Aneke, ordered their remand in prison custody, following an application by the prosecutor.
The prosecution had informed the court that counsel to the accused, had just served him a bail summons for his clients, adding that he would require time to file a counter affidavit in reply.
Justice Aneke adjourned the case to October 8, for hearing of the bail application, but ordered the accused to be remanded in prison pending the determination of their bail.
The prosecutor had told the court that the accused committed the offence between July 2012 and June 2013.

'He said that sometime in 2012, while Adedeji was still Commissioner, the Oyo State Government entered into partnership agreement with Bank of Industry, known as OYSG/B.O.I Fund, to create a pool from which indigenous entrepreneurs could access credit facilities.
He told the court that parties had made a contribution of N500,000,000 each, which amounted to N1 billion joint contribution, as the joint venture was aimed at promoting Micro and Medium business in Oyo State.According to the prosecutor, Adedeji lodged the said contributions into Enterprise Bank, where his wife allegedly worked as account officer, without the consent and approval of the Oyo State Government.

'He told the court that the accused then conspired to obtain over N77 million, which they allocated to non-existing companies, adding that the accused granted the facilities to Josh-Tolani Ventures, Tembenatil Ventures, Ojoo God’s Grace Cooperative Society, Agric Preserve Company Ltd, and Adis Steel Work Ltd.

The prosecutor said that upon investigation at the Cooperate Affairs Commission, CAC, it was discovered that none of these companies existed.