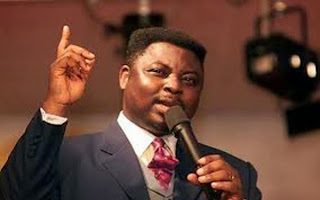 A very hard stance has been taken. And a celebrated preacher of the word risks jail term, if those behind this development have their way.


Full details of this developement is reproduced in this report obtained by naijacelerities.net

'According to a statement of claim filed before the court,
the company alleged that the land subject matter of this suit measuring 26.486 hectares situated at Offiran village was acquired in phases by the company from various land owing families of the village and it was let into possession since 2003.
Pursuant to the business objective of constructing and
developing housing estates, the claimant erected a giant bold and conspicuous bill board showing its address and other details for enquiries.

'However, the claimant alleged that in February 2013 when
work started on the land, the defendant drove away its workmen, consequently, the claimant petitioned the office of the Assistant Inspector General of Police on the activities of the defendant.
Thereafter the issue degenerated to petitions and counter petition both to the police and military authorities.
Consequently, the claimant then instituted this legal action claiming the sum of N100 million as specific and general damages for the demolition and destruction of its properties.
In his defence, Captain Ugoh while denying almost all the
averment of the claimant averred that he is the owner of the piece of land measuring about 10.136 acres located t Alamo, Aiyeteju Village, along Lagos-Epe Expressway, Ibeju Lekki local government area of Lagos state having taken over the land form his late father nze Vitalis Oguh who previously acquired the land from the owing families.

'The defendant averred further that sometimes in January,
2013, he was notified by his agent that some hoodlums led by one Surveyor had forcibly  entered the land uprooted his crops and destroyed the boundary pillars erected on the land. Consequently he inquire from the owing family if the land had been re-sold to any other person, the family said they never sold the land to anybody.

'Thereafter, he petitioned the Commissioner of Police and the
Assistant Inspector General of Poice who invited all the concerned families from Offiran Vilalte from whom the claimant claimed he bought the land in dispute.

'The said families made statements to the effect that they have no land
along the Lagos-Epe Expressway Road where the land in dispute is located.
Thereafter, the defendant urged the court to dismiss the claimant suit with substantial cost same being frivolous, gold digging and without merit.
However, as the legal battle was ranging on, four families
including the Baale of Ofiran village, Chief Ganiyu Raji through their counsel, Barrister Ade Oyebanji file an application before the court to join the suit as defendants, after listening to the submission of Mr. Oyebanji the court ordered that they should be joined.

'In an affidavit sworn to by a member of the families of Offiran Village, Alhaji Adio Shittu, he averred that offiran Village has no land along Lagos-Epe Expressway as the land in dispute is Alfa Alamo Village and not Offiran Village and that the land belongs to Oyafunke family of Aiyeteju village.
Alhaji Shittu further averred that they never assigned or handed over the land to the claimant and they did not sign any deed of assignment in favour of the company therefore the signature on the deeds of
assignment pleaded by the claimant company was forged as the Offiran land which the claimant negotiated for is different from the land in dispute as the land is far away from the land in dispute.
On the 25th of June when the matter came up before the court, the defendant informed the court that despite the fact that the claimant initiated this suit, it had started construction on the properties while the suit was still pending.

'Consequently, the court ordered construction work to stop forthwith as that would amount to self-help while its case was still pending.
But in defiant of the order of the court, the claimant continued unabated with the use of self-help by continuing with its constructions.
The court again on the 3rd day of July granted the following orders.
That an order for accelerated hearing of the claims be and is hereby made. It is further ordered that parties maintains status quo before
the beginning of hostilities. That the defendants shall keep off the land pending the hearing and determination of the claims.

'However, despite the order of the court the claimant was alleged to be hurriedly constructing and building on the property in order to circumvent the order of the court.
Consequently, the defendant averred that the act of self-help by Pastor Mathew Ashimolowo is capable of bringing anarchy and breakdown of law and order in the community where the property is located, therefore if the application for committal to prison is not granted, a situation of helplessness will be foisted on the court by the time the matter is set down for trial as the person sought to be committed to prison would have completed the erection of structures on the property.'
Posted by MAN ABOUT TOWN at 4:25 AM