Billionaire and spender reputed for relishing a bottle of champagne that costs $150,000 with ease, Kola Aluko is accused of abandoning his wives and family members while he lives a life of extra ordinary comfort. 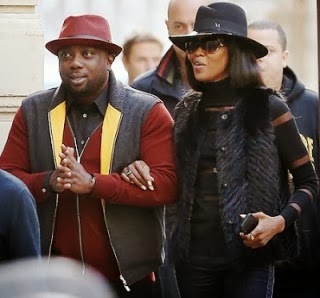 The business associate of fellow men of wealth and noted spender, Jide Omokore faces this charge on the heels of reports of 'becoming an item' with super model with high taste, Naomi Campel.


Here is a full report of the development as sourced by naijacelebrities.net.

'Those that have insight into his world have this to say to Mr Kola Aluko, the billionaire and number 2 man at mega company Seven Energy- Take care of your wives Kemi and Teni and other abandoned family members close to you with the money you are junketing about with, with the likes of the Naomi Campels of this world'

This charge comes on the heels of mass celebration of the high roller with super model Naomi Campel on his arm 'going shopping' in Paris.

Campel is generally known for associating with those that can match her Hi - end lifestyle.


And the associate of Jide Omokore, the promoter of one of the most flamboyant weddings in recent time is said to fit the bill. Sources claim Aluko is very much with at home with a bottle of Champagne that costs about $150,000 per bottle.

Recent revelations however indicate, the lavish lifestyle and image of wealth many dream of doesn't translate into 'care for some of the closest people to him'

According to informants, while the money man enjoys extra ordinary perks of life and live a life of amazing affluence, his first wife, Kemi stays neglected, same for siblings and family and father's home in Ikoyi.

'His second wife, Teni is described as slightly better off but 'certainly not there'.

The younger brother is labelled 'hustling' like just anybody 'on the streets'.


Findings revealed for reasons yet to be ascertained, Aluko maintains a stance of indifference to the 'economic state' of these people.

And attempts to seek reprieve from him tag 'futile'.

'The affected family members are said to have resigned toiling and praying for 'wealth' to call their own.

Sympathisers have however refused to let the matter go, using the opportunity of another open show of wealth to remind the owner of different versions of latest editions of top range automobiles of the 'suffering' of his 'abandoned family members'.

Together they have flouted different businesses that have transformed into big yields and some times controversies for them.

'Here is a link to a peep into their business relationship'

.....source societynowng.com
Posted by MAN ABOUT TOWN at 4:27 AM