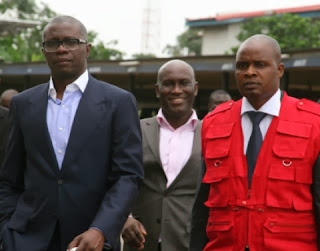 Walter Wagbatsama, the wealth Nigerian charged with N1.9b fuel subsidy
fraud is living a life of dream world luxury in the face of prosecution
.

His friends tagged the purchase 'recently'.

And not only this, those conversant with his ways asserts that 'Walter
has been very busy with his business and continued to make money'.

After weeks of dogding arresting officers from prosecuting agency,
Economic and Financial Crimes Commission and refusal to honour
invitations as well, trial into subsidy fraud allegations against
Walter and his associates commenced on Wednesday May 8 2013.

He is charged along with along with four others- Adaoha Ugo- Ugadi, Fakuade Babafemi
Ebenezer, Ezekiel Olaleye and Ontario Oil and Gas Nigeria Limited

Since the trial started, the court has heard of how Wagbatsama, his
company Ontario Oil and Gas Limited and his associates altered and
forged documents and conspired to obtain property under false
pretense. And ultimately defrauding the federation endlessly.

Recent assertions by his friends however indicate Mr Wagbatsama who
was granted bail in the sum of N450m along with three sureties, two of
whom must be resident in Lagos and have landed properties is unfazed
with his prosecution.

His friends revealed his latest acquisition and life of luxury on
record in response to a developing story ( in The Nation Newspaper
)that he has gone out of circulation.

The aim was to prove that Mr Wagbatsoma is still very much in wealth
and influence as before the N1.9bn fuel subsidy fraud case against
started.
Posted by MAN ABOUT TOWN at 2:45 AM