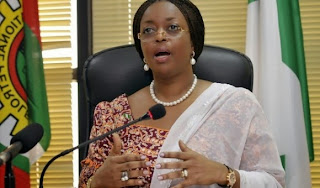 Petroleum Minister, Allison Madueke is back on the front burner of calls for investigation.

A civil right group, Coalition Against Corrupt Leaders has issued a demand for investigation of the series of allegations against her.

The group stormed the office of Anti graft agency, Economic and Financial Crimes Commission to make this demand on Tuesday October 1 2013 (Independence Day) .

The group utilised the date to register their clarion call as part to show it's significant.

Here is a reproduction of the development as source by naijacelebrities.net
'The Coalition Against Corrupt Leaders on Tuesday marched to the office of the Economic and Financial Crimes Commission in Ikoyi, Lagos State demanding for the probe of the Minister of Petroleum Resources, Diezani Allison-Madueke.
The group, with hundreds of supporters, stormed the office of EFCC around 9.45am.
Though initially barred from having access to the premises of the anti-corruption agency, the protesters eventually had their way.

'The Executive Chairman of CACOL, Debo Adediran, submitted a three-page petition to the Head of Operations of the Lagos office of the EFCC, Ilyasu Kwarbi.
CACOL demanded in the petition that the EFCC should investigate the alleged deal between the minister and other oil companies as well as the rate of oil theft, which happened under her as minister.
Adediran said: “We call on the commission to urgently commence a probe into various allegations of corrupt practices levelled against the person of the Minister of Petroleum.
“Such allegations, which include abuse of office, wastage of nation’s resources among others.

“This is why we are joining our voices to others to demand that the commission commences without delay the process of probing the office of the minister, beaming their investigative searchlight on those areas of her activities.”

Adediran called for objectivity in the probe.

Kwarbai told the protesters: “I appreciate your peaceful coordination.

“We don’t fear anybody or organisation but you should know that when allegations are brought, we need evidences for defence in the law court.

“We don’t sweep petitions under the carpet.
“We treat them and you should know that we receive petitions everyday and they have to be sorted one after the other.

“I will forward the petition to the chairman for approval.

“Our integrity matters to us and we have put structures in place to ensure that.”'
..
Posted by MAN ABOUT TOWN at 2:21 AM