The Economic and Financial Crimes Commission may have started investigation into the allegation of diversion of local government funds levelled against the administration of Governor Rauf Aregbesola of Osun State. 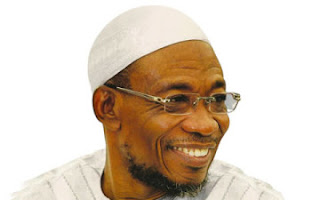 The EFCC’s Zonal Head, Ibadan, Akaninyene Ezima, said this in a letter of invitation sent to the Civil Societies Coalition for the Emancipation of Osun State.


According to the EFCC’s letter of invitation made available to our correspondent in Osogbo on Sunday by the Chairman of CSCEOS, Mr. Sulaiman Adeniyi, the anti-corruption agency invited the group to come and clarify some areas in the petition against the governor.

The invitation letter read,  “This is to acknowledge the receipt of your petition dated  April 4, 2016, captioned Report of Illegal Diversion of 30 Local Governments’ monthly allocations by the Osun State Governor, Mr. Rauf Adesoji Aregbesola.

“Why Civil Societies Coalition for the Emancipation of Osun State is calling for investigation and stoppage of Releasing of Local Government monthly allocations to Osun State through  Mr. Rauf Aregbesola and to inform you that investigation has commenced.

“In view of the above, you are hereby requested to report to the EFCC Zonal Office at No.16 Revd. Oyebode Crescent, Iyaganku, G.R.A., Ibadan, for an interview with the undersigned through the Head, Team B, on May 17, 2016, at 10am prompt.”

The governor and  some of his aides were accused of diverting LG allocations by the human rights group in a petition to President Muhammadu Buhari.
The group had claimed that the governor suspended democratic structure in the councils and had mismanaged funds allocated to them.

The CSCEOS’s petition read in part, “To affirm this illegality and unconstitutionality, Mr. Rauf Aregbesola suspended the democratic system in the constitutionally recognised  30 Local Government Areas of Osun State by appointing the grade level 14 local government staff as ‘council managers’ to man the council areas of the state instead of ‘democratically-elected chairmen  and councilors’ as stipulated in Section 7(1) of the amended 1999 Constitution of the Federal Republic of Nigeria in order to give Aregbesola a leeway in the criminal diversion of local government funds.

“That the Federal Government, the National Assembly and its anti-graft agencies should investigate the acclaimed road projects embarked upon by Mr. Rauf Adesoji Aregbesola on behalf of the local government areas of the state without following the due process of the Public Procurement Act.

“The violation of all due process in managing the public finances of Osun State by Mr. Rauf Adesoji Aregbesola has been seriously impacting negatively on the lives of the state masses including the state  and local government local  workers with their retirees alike.”