The cross-examination of the first prosecution witness, Sam Madojemu, in the on-going trial of former Minister for Niger Delta, Godsday Orubebe, on a one-count charge of false asset declaration has ended.
The witness had maintained before the Code of Conduct Tribunal (CCT) yesterday that the former minister failed to declare his full assets while in office. 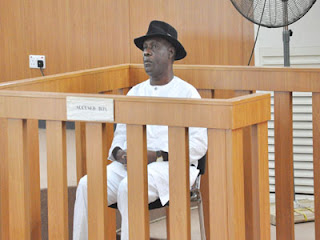 Orubebe was arraigned by the Federal Government on a one-count charge of false asset declaration, which he pleaded not guilty.
Under cross-examination by the defence counsel, Larry Selekowei, the witness, who is the head of investigation with the Code of Conduct Bureau (CCB), said the property, Plot 2057, Asokoro, Abuja, was not declared by Orubebe while in office between 2007 and 2011.


The witness added that Orubebe was invited and he promised to send his lawyer or come to CCB to clear himself, which he never did.
He, however, told the tribunal that he was not sure if the bureau wrote to Orubebe but he called Orubebe personally.
When asked if there was any printout of the conversation between him and Orubebe, he said it was considered not necessary in the circumstance.
Madojemu also stated that the Certificate of Occupancy of the said property was collected by one Rody on behalf of Orubebe but that there was no documentary evidence of application for the land, letter of offer, acceptance letter or petition.
Besides, when asked if eventually Orubebe is cleared on the ground that the property was a gift from the Federal Government, he said he would have still been dragged before the tribunal.
After the cross-examination, the prosecution counsel, Mohammed Diri, asked the court for a short adjournment which was granted.
The trial was consequently adjourned till next Tuesday.