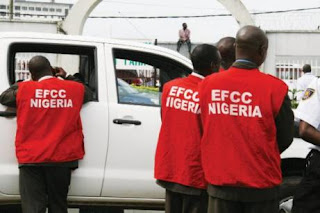 The Economic and Financial Crimes Commission (EFCC) has arrested the former Director of the Abuja Geographical and Information Service, AGIS, Hajia Jamila Tangaza, who also served as a
Media Aide to the former Minister for Federal Capital Territory, FCT, Mr. Bala Mohammed.

The former BBC Hausa staff; Tangaza was allegedly arrested Wednesday last week on ground that she had allegedly diverted the sum of 150 million Naira.

Sources told Pointblanknews.com that Tangaza allegedly allocated several lands in highbrow areas of Abuja to herself and cronies.

Tangaza and her cronies are now selling those lands for several millions, according to sources knowledgeable with the investigations and investing the proceeds in properties and other companies linked to her.

Sources confirmed that she is currently cooperating with investigators and linking the former FCT Minister, Bala Mohammed, in shady deals while they served.

The source said that she used the money to buy a house in the district of Asokoro in Abuja in affiliation with some companies.

Jamilah Tangaza, who was a former head of the Department Hausa BBC couldn’t be reached  because her mobile phones were switched off, and there was no reply with regards to the messages sent to her.

Sources from EFCC said the agency is questioning Hajiya Jamilah after it received information about the missing money, and is still not satisfied with the information Jamilah Tangaza gave regarding the charges.

According to the source, despite the lack of satisfactory information from her, the EFCC granted her bail.

...pointblanknews
Posted by MAN ABOUT TOWN at 5:38 AM