Twenty-nine-year-old Mayowa Ahmed yesterday died in a South African hospital about 10 days after her admission. 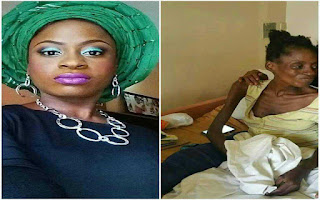 The late Mayowa left Nigeria on August 11 to treat Stage IV Ovarian cancer after her family was cleared of fundraising scam allegations by the police.

She expressed sadness that her sister died despite all the efforts to save her through the Whatsapp Social messaging platform.

Mrs Adeniran, in tears, said: “I could not talk or text that was why I did not inform you. This is not fair; after everything.”


She said the family had hopes that the late Mayowa would survive as she was said to be responding to treatment.

“I really don’t know what went wrong.  But she was a bit better yesterday (Saturday),” she said.

A family friend, Saheed Badmus, said Mayowa’s death came as a shock because initial report was that she was responding to treatment.

“Tope called me this (yesterday) morning; she was crying.  She told me Mayowa was dead.  Yesterday (Saturday), we heard she was responding to treatment only for her to die today (Sunday).  She was in South Africa with her eldest brother,” he said.

The late Mayowa’s brother tweeted news of her death on the social media yesterday.  Using his Twitter handle, @Asiwaju_Foye, he posted two tweets: “After a tough battle with Ovarian Cancer, Mayowa Ahmed of #SaveMayowa campaign has passed on; and “She tried, we tried but God’s will prevailed #RipMayowa”.

Last week, the late Mayowa’s family released a statement, thanking Nigerians for raising funds (about N32 million – apart from the $100,000 raised online via gofundme) for her treatment abroad.

This followed the police exoneration of the family of allegations of raising the funds without plans to treat her abroad.  The allegations were raised by Nollywood actress Toyin Aimakhu,
Aramide Kasamu of Life Stake Foundation and a  blogger, Linda Ikeji.  The police cleared all parties of wrongdoing and attributed the allegations to miscommunication.

The family had considered hospitals in the U.S., India and United Arab Emirates but settled for South Africa when other plans failed.

The family sought treatment abroad after finding it difficult to get accurate diagnosis about the late Mayowa’s ailment. The situation was compounded by her sickle cell anaemia, which made the hospitals to attribute her symptoms to Sickle cell crisis most of last year.


thenation
Posted by MAN ABOUT TOWN at 8:53 PM