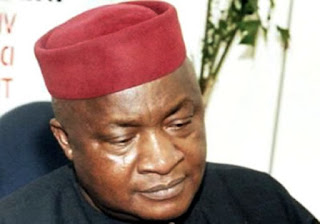 The Economic and Financial Crimes Commission has arrested a former Imo State Governor, Achike Udenwa, for allegedly receiving N350m from the Director of Finance of the Goodluck Jonathan Campaign Organisation, Senator Nenadi Usman, during the build-up to the 2015 presidential elections.

The money was said to have been part of the N4bn that emanated from the imprest account of the Office of the National Security Adviser domiciled in the Central Bank of Nigeria.

According to the EFCC, Udenwa who was the Imo State coordinator of the campaign organisation, had admitted in his statement of oath that he received the money via Diamond Bank account 0058805692 and 005950791 respectively on January 14 and January 28, 2015 in three separate instalments.

Udenwa explained that he and a former Minister of State for Foreign Affairs, Viola Onwuliri, who was his deputy at the presidential campaign organisation, were the two signatories to the Diamond Bank account that received the money.

Onwuliri has since left the country.

Investigations revealed that the money came from a company named Joint Trust Dimension Limited which is said to be owned by Usman.

This same company was charged alongside Usman and the Media Director of the campaign organisation, Chief Femi Fani-Kayode, before a Federal High Court in Lagos on a similar allegation.

Fani-Kayode had also admitted receiving N840m through the account while the Chairman of the Social Democratic Party, Chief Olu Falae, received N100m through his company, Marecco Nigeria Limited.

Udenwa, who also served as Minister of Commerce and Industry between 2008 and 2010 under Jonathan, had told our correspondent during an interview that he indeed received the money but never knew that it emanated from the ONSA.

The ex-governor told our correspondent that he was asked to open the Diamond Bank account so as to receive the mobilisation funds.

He said he spent the money for the exact purpose for which it was given to him and had told the EFCC that he could not return any money as it had all been spent.

Punch
Posted by MAN ABOUT TOWN at 1:23 AM