N182M Chartered Flight To China, Special Advisers For Wives, Helipad In Country Home & Other Allegations Of Flamboyancy Against Ibe Kachikwu 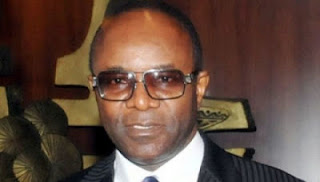 Minister of State for Petroleum, Dr. Ibe Kachikwu allegedly spent over N182million on a chattered flight to China for a three-day roadshow in the Asian country to attract investments to Nigeria’s oil and gas sector, an angry member of his entourage told
pointblanknews.com.

The source, who does not want to be named, described the Petroleum Minister as “extravagant, lavish and too flambouyant for Buhari’s anti-corruption Government”.
Investigations shows that a one way chartered flight from Lagos to Beijing cost about $316,000.00 (N115m) With the roundtrip according to PrivateFly an airline charter company that flies that route estimated at $500,000.00.
Sources confirmed that since becoming the minister of state for Petroleum, Kachikwu has not flown any commercial airlines both for local and foreign trips.
“It is worrisome that Kachikwu like the former minister of petroleum resources Diezani Alison-Madueke has been flying in chartered private jets since assumption of office,” a source told Pointblanknews.com
“The country is not happy. Too much money was spent on one man’s travels. That money could have been spent improving the lives of the people. It feels like he is spitting in our face, another source in the know said.
A source further revealed that Kachikwu, late last year built a Helipad in his expansive country home in Onicha Ugbo and flew on a chopper from his home on Christmas day to the Asaba airport; a journey of less than 15 minutes’ drive.
On a recent official visit to the United Arab Emirate, the flamboyant minister insists in staying at the Burj Al Arab hotel, “the world’s only seven-star hotel”, based in Dubai. The hotel stands on an artificial island on top of water and the cheapest room cost about N1.2M per night.
Kachikwu who has two wives has also approved Special Advisers for them in addition to dozens of Special Advisers he has employed while his brother, Dumebi Kachikwu who was indicted in the iGate Scandal in U.S, has an office space in Asokoro which serves as a clearing house for shady oil deals for the Minister.
The two advisers to his wives are paid from the Ministry of Petroleum, according to an insider source who wants to remain anonymous. Checks at the NNPC towers indicate that he also has a staff for the purpose of bringing his breakfast and lunch.
Although sources say the Minister has always insisted that his extravagant lifestyle is funded by International Oil Companies, IOC’s in Nigeria, pointblanknews.com could not confirm that.
The lifestyle of Kachikwu reflect the tragedy of resource-rich African countries where the leaders spend millions on luxury items, as the ordinary people live in abject poverty, lacking access to basic amenities and services such as clean drinking water, health care and education.
Only recently, the Minister of Finance, Mrs. Kemi Adeosun had painted a gloomy picture of the economy when she appeared before the Senate, saying the country was at the moment in tough place and in recession.

pointblanknews
Posted by MAN ABOUT TOWN at 5:21 AM