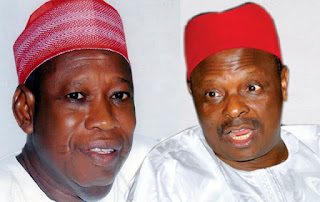 Armed policemen on Tuesday sealed off the residence of a former Governor of Kano State, Rabiu Kwankwaso, located on Lugard Road in Kano for 15 hours. The house is a few minutes’ drive away from the Kano State Government House.

The house also serves as the headquarters of the group loyal to the former governor popularly known as Kwankwasiyya.

The Commissioner of Police in the state, Mr. Rabiu Yusuf, who spoke through the command’s spokesman, Magaji Majiya, before the siege was lifted  said the action followed an intelligence report that there was a plan to conduct a mass wedding in the house.

He said, “We have directed our men to seal the residence because of an intelligence report that there is a plan to conduct mass wedding in the house.”

The News Agency of Nigeria reported that the state Police Command had on August 18 banned a mass wedding organised by a group loyal to Kwankwaso.

Majiya said in a statement that the event was stopped because it coincided with the state government’s planned empowerment programme slated for Aug. 20.

Majiya said, “The police have banned the two ceremonies indefinitely as security Intelligence available at our disposal revealed that some disgruntled elements are preparing to use the occasions to cause havoc in the state.’’

He warned that the police and other security agencies would not fold their arms to allow some people to breach the peace in the state.

“Our primary responsibility is to ensure peace, tranquillity, protection of lives and property as well as maintenance of law and order,” the police spokesman said.

After the policemen withdrew from the place, a handful of Kwankwaasiyya faithful were noticed discussing in hushed tones.

The link roads to Kwankwaso’s residence that were initially cordoned off had also been opened to traffic.

As of the time of filing this report, sources close to the Kwankwasiyya Movement, said the withdrawal of the police officers was sequel to an alleged complaint made by Kwankwaso  to  higher authorities over the rationale behind such an action