There is real chance that the Dream Team VI, Nigeria’s Under-23 football team to the Olympics, could boycott the quarter-final game against Denmark due to unpaid allowances. 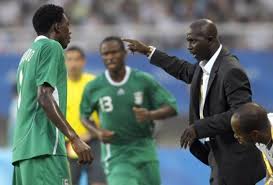 Although the players declined to speak on the matter when contacted by TheCable, Samson Siasia, their coach, spoke to Brila FM about how the country had “disrespected” his team.

“We have been disrespected from all angles – the sports ministry, the Nigeria Football Federation,” Siasia said.

“Is that how you will treat your own children? We are not street kids. We have only been paid allowances for 11 days. There is no match bonus.

“What of all the months we have been training in Nigeria and Atlanta? That’s not fair. I have not received my salary for the past five months.

“Everything is upside down and the boys don’t want to play anymore. Whatever they want to do, I am with them. They are right for fighting for their rights.”

However, Yakubu Dogara, speaker of the house of representatives, has appealed to the team not to boycott the match.

He urged the players to take patriotism as a fulcrum of their campaign, and promised to “personally do everything” within his powers to intervene in the matter.

He said the team — with the likes of John Mikel Obi, Yakubu Umar, Oghenekaro Etebo and William Troost-Ekong — has a very bright chance of repeating the feat of the Atlanta ’96 Dream Team.

“We will do all we can to ensure that all entitlements due to the team are paid, as we are already talking to relevant government agencies,” Dogara said.

“Football, being the major unifying factor in the country, should be maximized by all for Nigeria’s continued joy and unity. We will stop at nothing to ensure that we get the team to excel in Brazil and for Nigeria to recreate the watershed of Atlanta ’96.”
thecable
Posted by MAN ABOUT TOWN at 9:00 AM