The Minister of Science and Technology, Ogbonnaya Onu, has rejected the Toyota SUV given to him by the Ebonyi State Government. 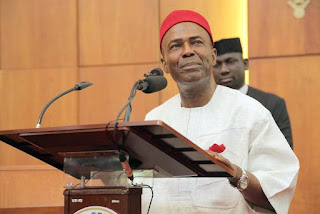 The minister, in a letter to Governor Dave Umahi, said he rejected the gift because the laws of the state excluded him from persons eligible to collect such gifts.

The letter was exclusively obtained by PREMIUM TIMES.

Quoting copiously from the constitution, Mr. Onu called the governor’s attention to the relevant sections of the constitution and how the state House of Assembly abused its powers to technically edge him out of his deserved pension, being a former governor of Abia State.

He wrote, “It is important that I draw your attention to provision of Section 124(5) of the 1999 constitution as amended which states that:

“Provisions may be made a law of a House of Assembly for the provision of person to or in respect of a person who has held the office of a governor or deputy governor and was not removed from office as a result of impeachment and any pension granted by virtue of any provision made in pursuance of the subsection shall be a charge upon the consolidated revenue fund of the state.”

Mr. Onu then added, “Instructively, a law enacted by the Ebonyi State House of Assembly titled: Ebonyi State Special Offices Pensions and Related Matters Law 2007, section 3 defined a Governor as a ‘Civilian Governor of or from Ebonyi State of Nigeria'”.

Mr. Onu said it was clear from the foregoing that he was the target of the change “in an apparent design to deny me of my due pension entitlement.”

“This is especially so in the circumstance where it is the duty of the state government to do so as a responsibility of the sharing of assets between Ebonyi and Abia states. You will recall that I was the first elected Governor of Abia state, in which a part later became a constituent part of Ebonyi State.”

The minister therefore urged the governor to initiate steps to redress the injustice done to him in the interest of fairness, justice and respect for the constitution of the country.

“Laws are not made to suit personal prejudices. Laws are made to serve enduring attributes of good conscience honour and equity,” Mr. Onu wrote.

Accordingly, in view of the prevailing circumstance, I regret to inform you that I cannot accept the gift of a Lexus Sports Utility vehicle. I do so with a deep sense of responsibility and conscious of the important need to build a better Ebonyi State where respect for the rule of law and the peoples’ will as well as the pursuit of their happiness will remain sacred.

Mr. Onu is the second personality to reject exotic car gifts distributed to former Governors Sam Egwu and Martin Elechi and erstwhile Secretary to the Government of the Federation, Anyim Pius Anyim.

The SUVs, which cost N29 million each or a total of N116 million, was rejected by Mr. Elechi, who also wrote to the governor returning the car.

It is not however unclear if Messrs Egwu and Anyim accepted theirs.


Premiumtimes
Posted by MAN ABOUT TOWN at 3:02 AM